Dmitry Medvedev calls Ukraine a “Nazi political regime” that will always “pose a constant, direct and clear threat to Russia” 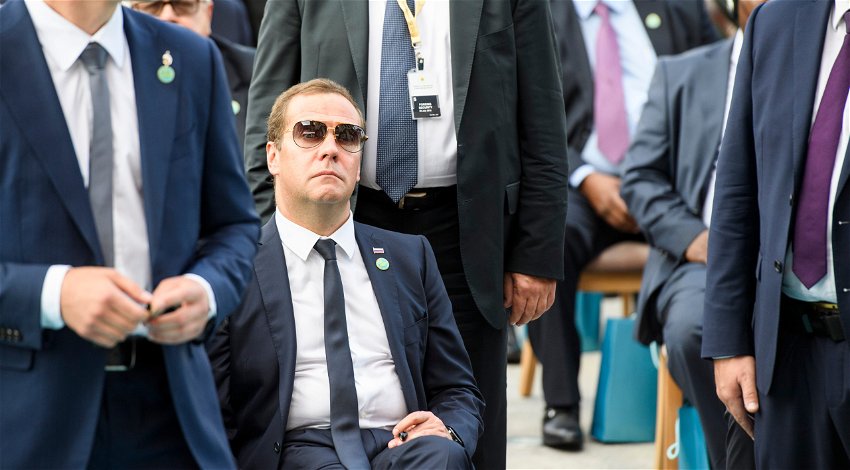 THE deputy head of the Russian Security Council, Dmitriy Medvedev, has called for ‘full-scale dismantling” of Ukraine’s Nazi political regime’.

Taking to Telegram after the Security Council meeting with Russian President Vladimir Putin, Dmitriy Medvedev said that Ukraine “in its current configuration with the Nazi political regime will pose a constant, direct and clear threat to Russia.”

He said that the Russian strikes that rocked Ukraine on Monday, October 10 was “the first episode”.

He said that it was his “personal position” that ” in addition to protecting our people and protecting the borders of the country, the goal of our future actions, in my opinion, should be the complete dismantling of the political regime of Ukraine.”

“In the morning, a massive strike with high-precision weapons was inflicted on energy facilities, military command and communications of Ukraine,” Putin said on Monday, October 10.

“If Kyiv attacks continue on Russian territory, Russia’s responses will be tough.”

Serious consequences of terrorist attacks in Kyiv against the Kursk nuclear power plant were prevented, he added.

Putin accused Kyiv of trying to undermine one of the sections of the Turkish Stream gas pipeline.

Russia is not allowed to investigate the sabotage at Nord Stream, although the beneficiary is known, Putin said.

Putin asked the head of the Russian Defense Ministry to report to the Security Council on the results of the strike on targets in Ukraine, as reported by TASS.

“Zelensky complains about flyovers in Kyiv and other cities,” Ramzan Kadyrov wrote.

“And how did you, sucker Zelensky, think: you are allowed and others are not?”

He added: “So for eight years, bombing civilians, destroying the infrastructure of LNR cities, covering a nuclear power plant with shells, blowing up bridges, shelling important facilities was allowed, but as soon as it landed on your head, suddenly no one was allowed?

“We warned you, Zelensky, that Russia hasn’t really started yet, so stop complaining like a cheapskate and run away before it gets here. Run, Zelensky, run without looking back towards the West.”