UPDATE: How and who was responsbile for blowing up the Crimea bridge? 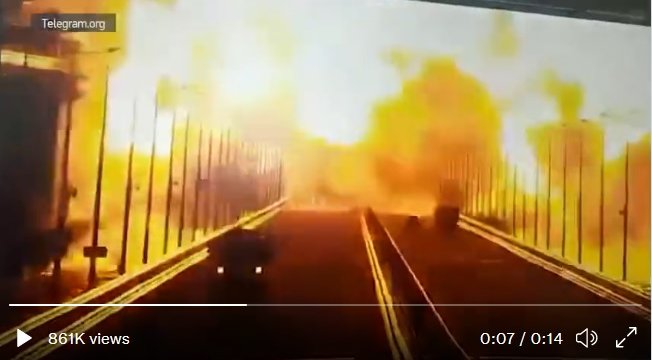 16:54 (October 10) – The question of how and who was responsible for blowing up the bridge into Crimea is a serious one, although apologies are due for adding a little lightheartedness to the original story.

The use of the “suicide bomber” was added to reflect the absurdity of a situation in which Russia seemingly was caught unaware that one of its main armaments supply links would be a target for those who it had so brutally and unnecessarily attacked.

Given that Ukraine issued stamps within hours of the bombing depicting the bridge’s destruction, that would suggest that they had a hand in blowing up the bridge. Certainly, they stood to gain from the bridge’s destruction, but it does beg the question of how such an enormous explosive device was smuggled onto the bridge from the Russian side. That would suggest that there could be more to the story, particularly in light of growing unrest in the country following Putin’s callup but also continuing differences within Crimea and surrounding areas.

Video available online showing the bombing suggests that whoever was driving the truck would’ve died in the explosion, with no indication anyone had jumped from the vehicle in time to save their skin.

No doubt the full story will come out in time, but for now, there are many questions that the Russians will be asking as it looks to improve the security of its borders and its key supply lines.

Putin’s response has been swift and indiscriminate, threatening to take the war to a new level. Whilst the target was an obvious one, it may have been a step too far at this point in the conflict.

20:44 (October 8) – Was the destruction of the Crimea bridge a suicide mission using a truck carrying explosives?

This morning the bridge that links Russia with Crimea, a crucial link between the two areas was badly damaged in an explosion prompting Russian President Vladimir Putin to say that it was a declaration of war (sic).

Reports on social media late on Saturday, October 8 suggest that it was an act of suicide by a Ukrainian driving an explosive-laden truck.

Russian officials reportedly have found the perpetrator behind the #Kerch bridge explosion in occupied #Crimea pic.twitter.com/Osl91TsG2F

But experts looking at video of the explosion and the extent of the damage have in conversations with news stations said that it simply could not have been caused by a truck carrying explosives.

One of those is Alexandre Vautravers, Editor-in-Chief at Swiss Military Review who told Al Jazeera that the Crimea bridge explosion could have been caused by something other than the truck blast alone.

The Crimea bridge was destroyed in a Suicide bombing. It will be the first suicide bombing that the mainstream media will celebrate. pic.twitter.com/cbjGIQ2bmw

He said: “The possibility of a truck carrying explosives, and we’re talking about several hundred kilos of explosives, is probably not going to produce this much damage.

“We need to take with a grain of salt the story to us about how this truck arrived there and all of a sudden produced all of this damage.”

Vautravers believes that there is more to the story and that someone is not telling the truth about the explosion, adding that he believes that it would take more than a truck carrying explosives to do such damage.

Ukraine would appear to have taken responsibility for the destruction of the Crimea bridge issuing stamps showing the blast not hours after it happened. So how did they do such damage, could the bridge have been sabotaged and set off to coincide with the passing of the truck, and there is the question of who was driving the truck?

Perhaps in the coming days, we will find out more about whether a truck carrying explosives did blow up the Crimea bridge or whether there is indeed more to the story.