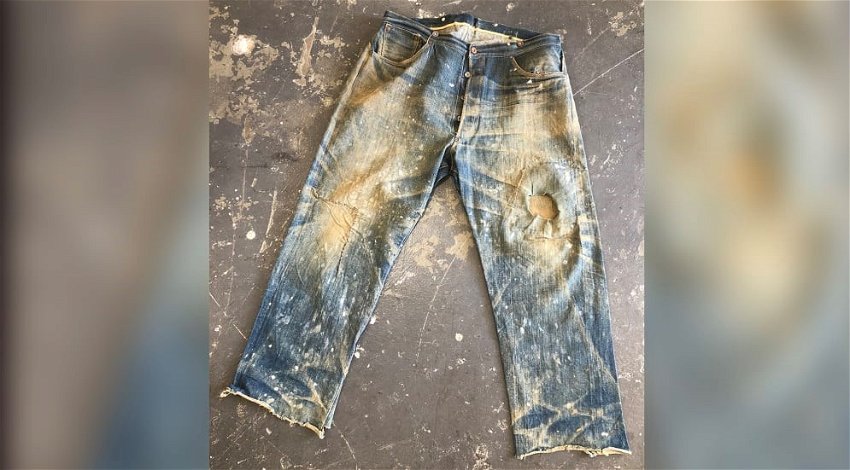 The jeans, which were sold on Thursday, October 13, were found in an abandoned mine according to news site CNN.

A “denim archaeologist”, Michael Harris, was said to have found the jeans, which were bought by 23-year-old Kyle Hautner and Zip Stevenson. The latter is according to CNN, a veteran of the vintage denim market having run a denim repair shop in Los Angeles for the last three decades.

Stevenson, who contributed 10 per cent of the price, said: “We didn’t have any plans to buy the jeans together until the auction started, which is kind of insane looking back on it.”

Hautner who paid the other 90 per cent said the jeans had some wear and tear but are extremely durable. He said he had never seen a pair quite like these adding: “These jeans are extremely rare — especially in this fantastic worn condition and size.”

Stevenson heard about the jeans around five years ago after Harris announced that he had found the pair after spending years searching mines for good quality vintage jeans.

He said that only a couple of pairs this old exist, but they are kept in museums and are too delicate to wear. He said these are different: “surprisingly durable, they definitely can be worn.

“There’s a couple of soft spots on the jeans that could use a bit of reinforcement but otherwise they’re super-duper solid jeans.”

“I could easily imagine Johnny Depp or Jason Momoa wearing them.”

Auctioned at the Durango Vintage Festivus on the outskirts of Aztec, the four-day festival is run by vintage denim expert Brit Eaton.

He said finding items like this is an addiction, adding that: “I needed a ‘headliner’ that would rival the music acts I booked. I knew these jeans would be a major draw.

“I’ve been doing this business for a quarter of a century and the average vintage jeans are worth about $100. So to find a pair this valuable is once in a lifetime.”

Saying he didn’t originally intend to sell the jeans. So to discourage buyers he listed them at a hefty price, but he wasn’t surprised when they sold given their rarity.

Stevenson said:  “We would consider offering them for sale to an extremely interested private buyer,” adding they would prefer them to be bought and displayed in a museum “such as the Smithsonian or the Metropolitan Museum of Art.”

For now, the pair of 19th-century Levi’s are being kept in a safety deposit box near Stevenson’s Denim Doctors store in Los Angeles. Those who want to see them can make an appointment to do so.