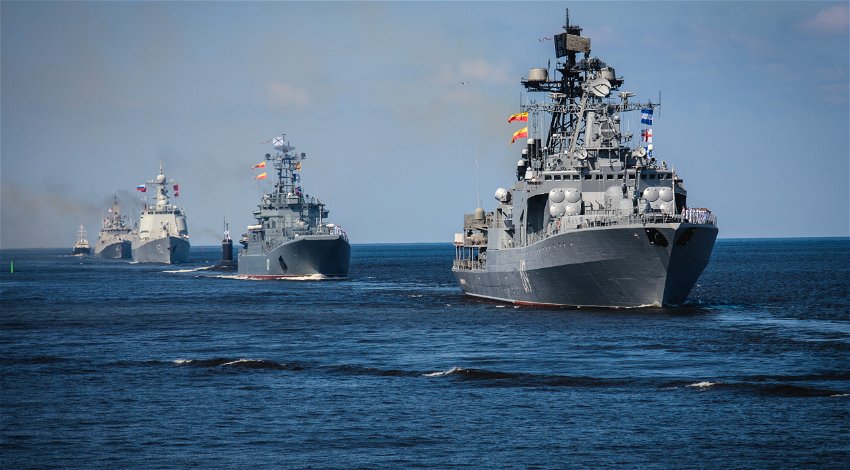 ACCORDING to reports coming out of Ukraine on Friday, October 14, the group of Russian Black Sea Fleet ships has grown as they continue manoeuvres along the southern coast of Crimea.

The Russian Black Sea Fleet now consists of 15 ships and boats in the Black Sea off the southern coast of Crimea, the Operational Command “Pivden” (South) reported.

“In the Black Sea, during a moderate storm, the enemy ship group has grown to 15 units, which continue manoeuvres along the southern coast of Crimea,” it wrote.

“There are three Caliber carriers on combat duty, one of which is underwater. The total number of missile equipment is up to 20 missiles.”

It added: “Ukraine’s Defence Forces continue to perform anti-paratroop defence tasks along the dangerous areas of the Black Sea coast and covering the state border of Ukraine with the unrecognised Transnistrovsk Republic.

“Given the development of the environment and predicted tactics of the enemy’s actions, strikes from the sky remain maximum likely, both with the use of aviation and unmanned aircraft.”

Russia has reportedly been reinforcing its Black Sea Fleet around Crimea in the days since the attack on the Crimean Bridge.

On Wednesday, October 12, Russia’s FSB announced that following investigations from the Russian Investigative Committee, which was set up by Russian President Vladimir Putin in the wake of the Crimean Bridge explosion, eight arrests were made.

“The organiser of the terrorist attack on the Crimean bridge was the Ukrainian Defence Ministry’s Main Directorate of Intelligence, its head Kyrylo Budanov, employees and agents, in addition, five Russian nationals, three Ukrainian nationals and an Armenian have been detained,” the Federal Security Service’s Centre for Combating Terrorism said at the time.

Due to this information, it was announced on Thursday, October 13, that the National Security Service of Armenia had opened a criminal case on the “terrorist attack” on the Crimean bridge.

“Information was published in the mass media that the explosives used to carry out the terrorist attack on the Red Sea of ​​Crimea on October 8, 2022, were hidden in a truck driven by an RA citizen, who had entered the Republic of Armenia from abroad before that, and then: travel to the Russian Federation,” the security service wrote at the time.

“In order to verify the accuracy of the information received and to clarify all the circumstances of the case [about the terrorist attack on the Crimean bridge], a criminal case was initiated in the investigative department of the National Security Service of Armenia in connection with complicity in international terrorism, smuggling of explosives across the border of the EAEU by a group of persons, as well as forgery of documents.”