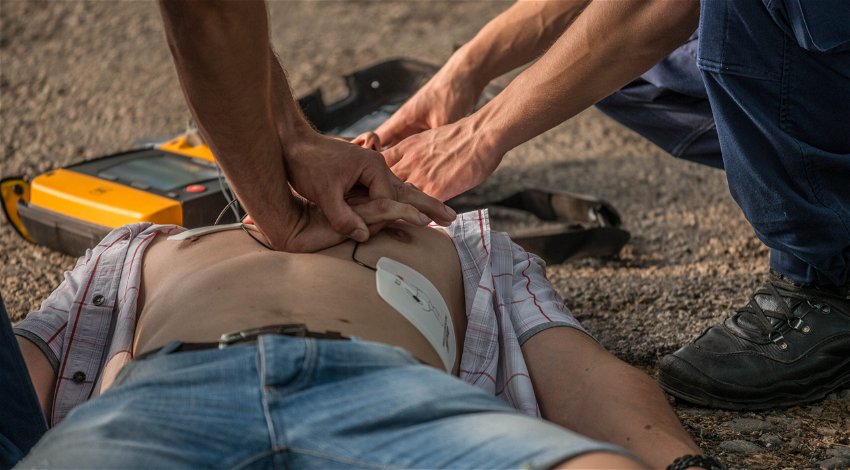 Ahead of Restart a Heart Day in Wales on October 16, Morgan gave an update about progress to implement the Out of Hospital Cardiac Arrest Plan and Save a Life Cymru’s work.

“On 16 October, we mark Restart a Heart Day. Save a Life Cymru and its partners will be encouraging us to learn more about life-saving cardio-pulmonary resuscitation (CPR), using defibrillators and knowing how to help when someone has a cardiac arrest,” she said.

“I want to use this opportunity to provide Members with a further update about progress to implement the Out of Hospital Cardiac Arrest Plan and Save a Life Cymru’s work.”

She added: “The Out of Hospital Cardiac Arrest Plan was launched in 2017 and we established the Save a Life Cymru partnership that brings together organisations across Wales to help develop the Welsh public’s CPR and defibrillation skills so people feel confident to help if they witness someone experiencing an out-of-hospital cardiac arrest.

“Last year we increased the funding for this life-saving programme.

“Earlier this month a new save a Life Cymru campaign was launched. ‘Help is closer than you think’ (Cofia, mae help wrth law) which focuses on increasing people’s confidence to intervene in a cardiac arrest emergency by highlighting the importance of calling 999 immediately, as well as the support provided by the call handler to do CPR and locate a registered defibrillator until an ambulance arrives.

“Save a Life Cymru has recruited a clinical out-of-hospital cardiac arrest programme manager who is developing an all Wales CPR and defibrillator framework to help communities become rescue ready and have the right resources in the right place to help someone having a cardiac arrest,” she continued.

“It has also recruited four Save a Life Cymru community support coordinators, one of whom is already in post, and it is hoped the remainder will be in post before the end of November.

“They are also currently advertising for two Save a Life Cymru community support team leader posts.”

Save a Life Cymru is working with a range of organisations to support people of all ages and backgrounds to learn CPR and defibrillation skills, including:

She added: “During 2021/22 I announced a further £1m to purchase 1,000 additional defibrillators which community groups and public organisation across Wales were able to apply for.

“638 groups and organisations successfully applied for a defibrillator and so far about 238 have been installed in communities across Wales.

“There have been some delays in groups being able to purchase and install the cabinets so defibrillators are still being distributed.”

“Communities and organisations which already have defibrillators are being encouraged to register them on The Circuit – more than 7164 are registered and now 72 per cent have a guardian. We have seen a significant increase in the number registered and in the percentage with a guardian but there is still more work to be done,” she added.

“Additionally, the Welsh Ambulance Service partnered with GoodSAM app to improve mobilisation of clinically trained staff and volunteers to life-threatening emergency calls. So when an emergency call is received by the ambulance service and classified to be of a life-threatening nature, details will automatically be sent through to the GoodSAM app to alert the nearest approved volunteer responder.

“They will shortly be relaunching the GoodSAM app in Wales, which was paused during the pandemic, and this will open up being a GoodSAM responder to all eligible individuals who have signed up and been approved by GoodSAM and partner organisations. This will be a huge step forward in Wales.”

“We have made substantial progress over the course of the last twelve months and have heard stories of the differences this work is making to people’s lives. We know that every second counts when someone goes into cardiac arrest. We can all help raise awareness of the importance of dialling 999 and giving early CPR and defibrillation,” she concluded.

The news of the plan comes after former Swansea defender Mark Davies died at the age of 49 after collapsing on the pitch during a cup final earlier in the year.

The former Swans footballer was playing in an over-45s final in Wales on Sunday, May 15, when he tragically dropped dead after collapsing on the field.

Despite emergency medical assistance, the Llanelli Town player was pronounced dead at the scene.

Davies, who played three times for Swansea during the 1991-92 season, lined up for Llanelli as they took on Penybont in the Wales Veterans’ Cup final but suddenly died.

Originally from the UK, Matthew is based on the Costa Blanca and is a web reporter for The Euro Weekly News covering international and Spanish national news. Got a news story you want to share? Then get in touch at [email protected]news.com.