Huge quantity of cocaine seized in Spain with raids carried out in Cádiz, Barcelona and Almería 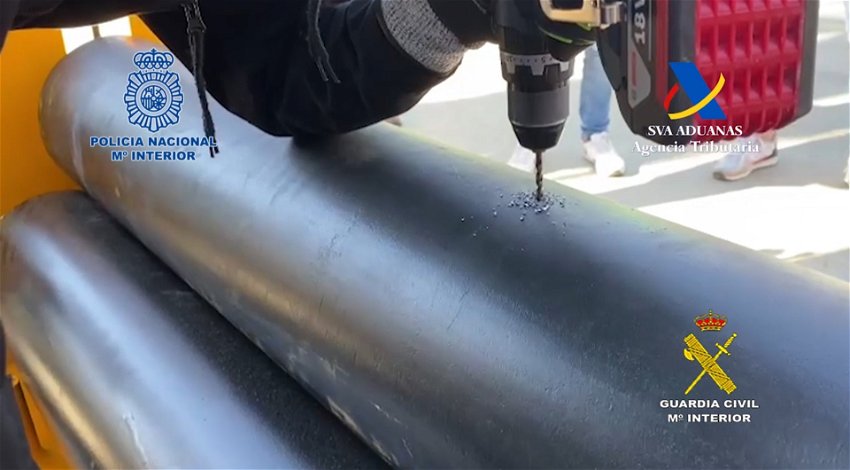 Huge quantity of cocaine seized in Spain with raids carried out in Cádiz, Barcelona and Almería. Image: Guardia Civil

A JOINT operation between Spain’s Guardia Civil, the National Police and the Tax Agency’s Customs Surveillance Service, led to raids being carried out in Cádiz, Barcelona and Almería and a huge quantity of cocaine being seized.

Sixty-six kilos of cocaine was seized during the operation which saw raids carried out in Algeciras (Cádiz), Barcelona and El Ejido (Almería) after it was discovered that drugs were being smuggled into Spain hidden inside industrial machinery.

“The operation – part of the plan to combat drug trafficking in the Campo de Gibraltar area – resulted in the arrest of eight people,” the Guardia Civil said on Wednesday, October 19.

The criminal gang bought industrial machines in Peru, where “several people with mechanical knowledge fitted them with hidden compartments to hide the drugs and then send them to Spain by sea.”

“The investigation began thanks to international police cooperation when the Peruvian authorities informed the agents of the existence of a criminal organisation based in Peru and Spain,” it added.

“The information provided referred to a group specialised in exporting large quantities of cocaine hidden inside large rolling machines via sea containers.”

It added: “At the beginning of April, officers detected a container suspected of concealing a large quantity of cocaine inside industrial machinery at the port of Algeciras.

“The investigators found that the container was carrying four heavy-duty rolling machines and after a thorough inspection discovered that they had been modified at the base and welded together again with steel sheeting.

“A few days later, the container left Algeciras on board a ship for the port of Valencia, where it remained for several days without making any movement in order to avoid being linked to the container carrying the drugs.”

According to Spain’s Guardia Civil, in mid-May, “officers detected how the container was leaving Valencia on board a lorry to head towards Barcelona, specifically to an apparently abandoned farm located in the municipality of Sabadell.

“There they observed several individuals who, using a forklift, unloaded the four rolling machines and took them into a warehouse where they began to handle them.”

Gang members were caught red-handed “when they began the process of extracting the cocaine.”

Officers initially arrested six people who were on the scene and they seized 61 cocaine tablets – located when dismantling the steel sheets of the base of the machines – which yielded an approximate weight of 66 kilos of narcotics.

In September, officers arrested another two people related to the investigated facts in Barcelona and El Ejido (Almería). They also carried out three searches in Barcelona and the Almeria municipalities of El Ejido and Roquetas de Mar.