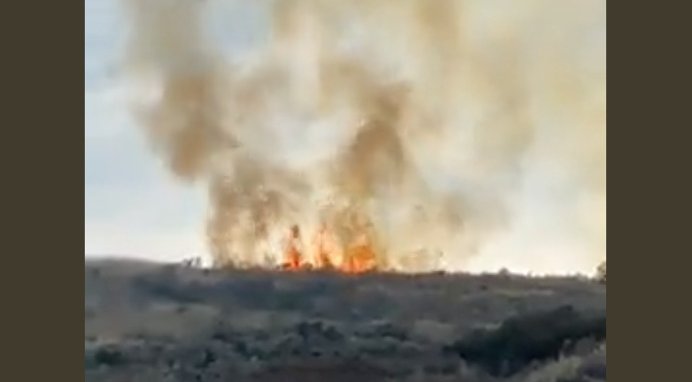 A FATAL incident was thankfully avoided in the United States on Wednesday, October 19 (local time) when the pilot ejected from a fifth generation F-35 C Lightning II fighter before it crashed near Salt Lake City.

The fifth generation F-35 fighter crashed at the end of the runway at Hill Air Force Base in Utah but not before the pilot ejected.

The cause of the crash is unknown, the US Air Force said.

The cost of the fighter is 80 million dollars.

Video footage shows the aftermath of the crash as the crash site burned brightly.

A F-35 Lightning II fifth-generation fighter crashed in the U.S. The pilot managed to eject. pic.twitter.com/glDQC0dAfX

The 388th Fighter Wing Twitter account tweeted at the time: “An F-35 from the 388th crashed at the north end of the runway @HAFB. Pilot ejected. Emergency crews are responding.”

The crash occurred at approximately 6.15 p.m.

An F-35 from the 388th crashed at the north end of the runway @HAFB . Pilot ejected. Emergency crews are responding.

An image emerged of the wreck was shared on social media.

The wreckage of the fifth generation F-35 fighter. pic.twitter.com/Ts6EnQ1jz2

“The pilot ejected was recovered and has been taken to a local medical centre for observation,” Hill Air Force Base tweeted. No further details about the pilot’s condition have been released.

The cause of the crash is being investigated, the wing said.

According to initial reports, the fighter was on its way back to base following a routine training mission.

Colonel Craig Andrle, commander of the 388th Fighter Wing, said at a news conference: “All of us as pilots take every opportunity we have to mitigate the damage to anything on the ground, so I do know that the pilot made his best effort to avoid any buildings or anything on the ground prior to ejection.”

The news comes after it was revealed that the US Army had deployed the fifth generation of F-22 fighters in the Netherlands.

The Dutch MoD announced that the Netherland Air Force would be training with the US Air Force, who have deployed fifth-generation F-22 fighters in the European country.

“The Air Force will train with the US Air Force in the coming weeks,” the Dutch MoD said.

“American aircraft are at Leeuwarden Air Base during that period. These are F-35s, F-22s and F-15s. The first fighter planes have already arrived.”

It added: “Dutch and American fighters will be flying a number of joint exercise missions in the near future.

“The aim is to integrate weapon systems. It is also about promoting mutual cooperation and deployability between NATO partners.

“The F-22s and F-15s will stay at Leeuwarden for about a week. The F-35s leave a week later to practice elsewhere abroad.”