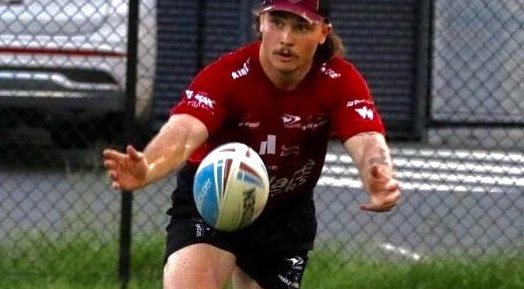 A RUGBY league star has tragically died after falling from a nightclub balcony.

Security cameras from the nightclub where Australian rugby player Liam Hampson fell from a height of 14 meters have revealed his final moments, say police.

The Apolo hall in Barcelona recorded the accident, which happened in the early hours of Tuesday morning.

The videos, provided to regional Mossos d’Esquadra police officers, “confirm that the 24-year-old’s death was an accident and that no third party was involved”.

The Queensland rugby league player had not been seen for 30 hours after disappearing while partying with a group of NRL players.

Footage is reported to show Liam, separating from his group of friends to go to the bathroom. Instead, he opens an emergency door of the club as one of his friends appears to warn him of something.

He finds himself locked out of the nightclub and on an interior terrace, where security cameras show Liam standing in a corner to urinate. He then jumps over a wall of about one metre, before tragically plunging into an inner courtyard 14 meters down.

The young rugby star died on the spot due to the strong impact.

As his friends launched a search party for Liam, on Tuesday the maintenance and cleaning workers of the Apolo hall heard a mobile phone ringing, but they did not know where it was coming from.

Liam was discovered 30 hours after he went missing.

Managers at the Sala Apolo nightclub told News Corp Australia that they were “beyond appalled” by Hampson’s death.

They said in a statement: “These are sad and very painful moments.

“The management and the entire Apolo team are beyond appalled by what happened and we express our deepest condolences to the family and friends of Liam Hampson.

“We have placed ourselves at the disposal of the Mossos d’Esquadra police force and will continue to do so in relation to any matter concerning the fatal accident.”

October 20 – Liam Hampson, 24, was found dead in the Barcelona venue having been missing for more than 30 hours.

His body was discovered inside an internal patio at Sala Apolo where he died following a suspected 10-metre fall.

Australian Liam, who played for Queensland Cup side Redcliffe Dolphins, had last been seen at the club on Tuesday around 4.30am local time.

He was on holiday in Europe with a group of friends when he went missing.

Mossos d’Esquadra officers said that at this stage they were treating the death as accidental and the result of a fall of around 10 metres.

A spokesman said: “It was in an internal patio which was not part of the public area of the nightclub.

“I don’t know how he would have got into that part of the building but he accessed it and from there fell around 10 metres to an interior patio.

“The fact it wasn’t a public area helps to explain why the workers who raised the alarm didn’t do so until Wednesday lunchtime local time.”

This is so sad. Liam Hampson’s father Brett issues this statement, after the Rugby League player was found dead in a Barcelona nightclub. The Redcliffe Dolphins star was holidaying with fellow QLD players 💔 @TheTodayShow pic.twitter.com/THCe8CLJcj

Liam’s family and the club have spoken about how they are “devastated” by Liam’s death.

His father Brett Hampson said on Facebook: “We woke up to the news that no one wants to hear, we are devastated to learn that Liam had an accident and unfortunately has not survived.

Liam’s athlete’s sister, Liarna Hampson, said on Instagram that she and her family lack the words “to express our pain.”

Redcliffe Dolphins, the club in which the Australian played, expressed its “deep sadness” at his death, adding condolences to his family for the “loss of a vibrant and wonderful young man”.