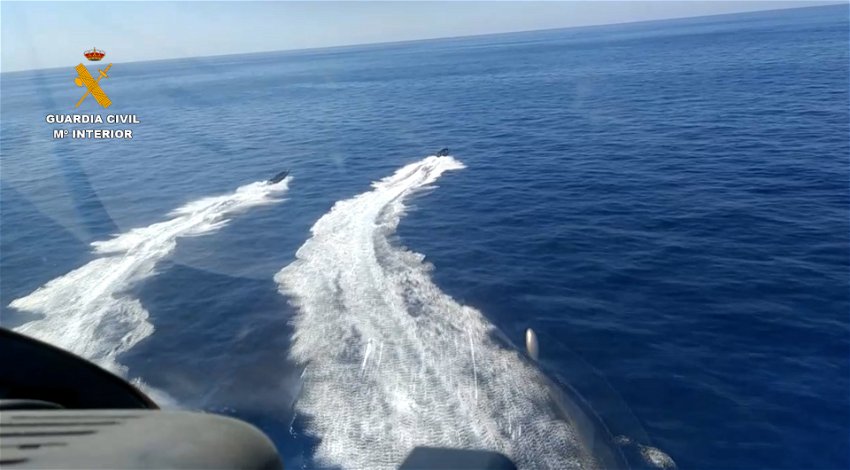 The Guardia Civil has seized 3500 kg of hashish in waters close to the province of Huelva after carrying out a high-speed pursuit of a semi-rigid vessel of the type normally used to smuggle drugs by sea.

The operation was initiated when the Guardia Civil’s 062 Operational Coordination Centre detected the presence of a semi-rigid boat with several occupants off the beach of Nueva Umbria, carrying on board a large number of bales heading towards the coast, allegedly with the intention of smuggling in that area.

A coordinated interception operation was immediately set up involving civil guards from the Judicial Police Unit of the Command, the Provincial Maritime Service and an Air Service helicopter, the Guardia Civil confirmed on Sunday, October 23.

The drug traffickers, after detecting the presence of the Guardia Civil, gave up their intention and headed south again to evade the agents, but they did not succeed in their task as they were located some 20 miles from the coast by the helicopter and the Maritime Service boat. At that point, the tracking of the vessel began, which lasted for about 40 minutes.

During this tracking and in order to gain speed to avoid being overtaken, the four occupants of the vessel threw all the bundles they were carrying into the water, losing all the merchandise.

Meanwhile, the pilot of the “narco-boat” carried out reckless manoeuvres in order to avoid being overtaken, putting the physical integrity of its occupants and the Maritime Service agents following them at serious risk.

The seized drugs were distributed in 100 bales weighing between 30 and 35 kilograms each, giving a total weight of around 3,500 kilograms which were collected by the agents for subsequent destruction.

Investigations are still ongoing and future arrests are not ruled out.