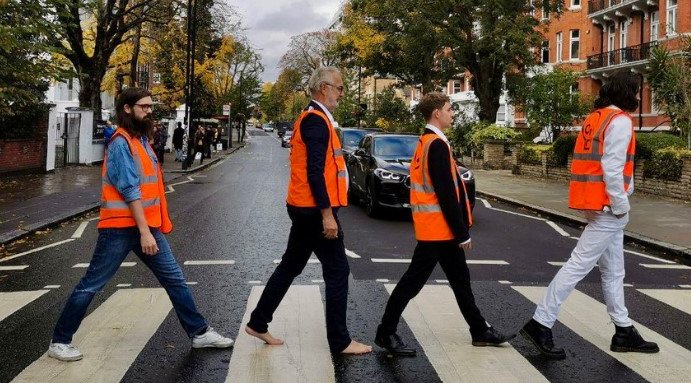 Four activists from the Just Stop Oil group were arrested by the Met Police after glueing themselves to the iconic Abbey Road zebra crossing in London.

London’s Met Police arrested four Just Stop Oil activists this afternoon, Sunday, October 22, after they decided to hold a protest at the iconic Abbey Road zebra crossing. The four people donned orange high-viz jackets and mimicked the pose made famous by the Beatles on their 1969 album cover before glueing themselves to the tarmac.

The incident occurred at around 1pm with the protestors blocking the road, leading to angry responses from motorists who were subsequently unable to pass.

Met Police officers were promptly on the scene to arrest them and take them into custody in central London for wilful obstruction of the highway. As reported by the force, both carriageways of the road were once again cleared to traffic by 2:40pm, as reported by news.sky.com.

“I’m a musician, I don’t want to be here disrupting the most iconic location associated with a band I admire and love. But unless we tackle the climate crisis, we will lose all that has been created, all that will be created, all that brings joy and comfort to millions”, commented 22-year-old Eben Lazarus, from Brighton.

💬 "We're now the results of our past actions, and in the future we'll be the results of the actions we're performing now." So said George Harrison. Never have his words rang more true than they do today"#JustStopOil pic.twitter.com/flidfLsJdt

In a statement, Just Stop Oil committed to continuing with its protests. Today was the group’s 23 such day of creating civil unrest. It said they will: “peacefully resist the government’s plans to licence over 100 new oil and gas projects by 2025, and its failure to fulfil its promise to help people with their skyrocketing energy bills”.