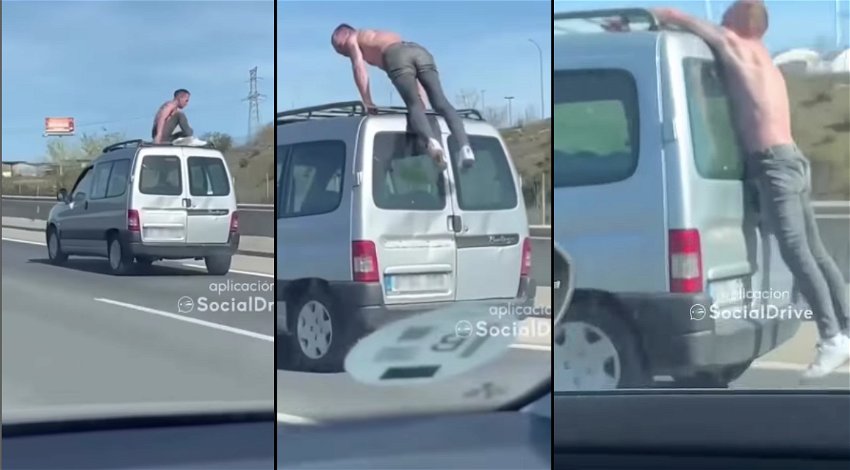 A SHOCKING video has emerged showing a topless man climbing onto a car roof before hanging off the back while travelling at speed on a motorway reportedly in Madrid.

In the clip, someone is seen driving a Citroen Berlingo van with a roof rack, where the bare-chested man sits facing backwards with his legs hanging off the side.

He then turns around and hangs his whole body off the back of the vehicle, holding onto the roof rack for support.

It is not known what happened to the semi-naked man, or the driver of the vehicle.

The video was posted on Instagram by Fuengirola Se Queja, an account that posts goings on in the Costa del Sol town.

However, this particular video is purported to have been captured on the A5 motorway in Madrid back in April – although this has not been confirmed.

The group wrote with the video: “What do we do with this one? To the people, what’s going on in my head? What leads them to do such acts?”

Followers were quick to comment below the video, with most people displaying their shock at such a dangerous act, while others branded the man Indiana Jones and said he’d ben watching too many movies.

One said: “Did y’all report him? Because this can’t be recorded alone and already… We have to act on these people.”

A second wrote:  “I only see these things in Spain.”

Another quipped: “Reminded me of Indiana Jones.”

“He has seen a lot of movies,” another agreed.

When commenters asked when and where the incident happened, one user replied: “This is from April and it was on the A5 in Madrid.”