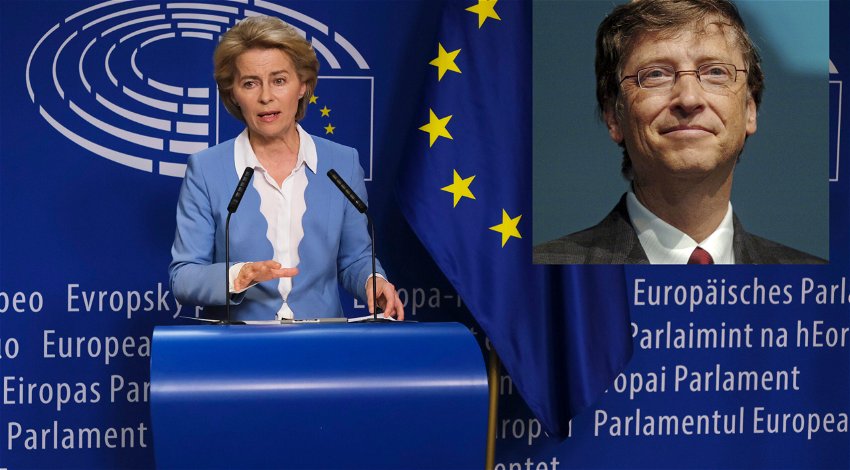 The German politician, who has been serving as the president of the European Commission since 2019, expressed her thanks in a speech at the Grand Challenges Annual Meeting 2022.

Von der Leyen said she was “moved” by the accolade given by the Bill & Melinda Gates Foundation, which she declared “belongs to all Europeans who showed such dedication during the pandemic”.

At the annual meeting, which is committed to equity and health and took place in Brussels, the president said: “It is so good to see you again Bill because the last time we met was just a month ago in New York at the Global Goalkeepers event.

“I was very moved by your foundation’s recognition of Europe’s leadership on global health and the fight against COVID-19. The award is truly a collective one.

“It belongs to all Europeans who showed such dedication during the pandemic – from the frontline workers in our hospitals and essential services to the scientists who developed the life-saving vaccines.”

Everyone at #GrandChallenges is committed to equity and global health.

We’re on the right track, but we still have some way to go.

Next month @EU_Commission will table the 🇪🇺 Global Health Strategy.

To progress together towards our global goal. https://t.co/V3UEMN46zS

The president went on to talk of Europe’s plight throughout the pandemic, saying that despite Europeans taking “tough and painful public decisions”, the EU responded with a different path.

She said: “There was painful competition for protective equipment, ventilators, and other medical supplies between the different Member States. Vaccine nationalism became the norm around the world.

“I can tell you – we Europeans had our tough and painful public discussions. But at a certain point, the European Union decided to take a different path – the path of solidarity and openness.”

“The sixth and final lesson concerns, indeed, the global health system. Over the years, global health has been consistently underfunded and neglected. Not by the likes of the Bill & Melinda Gates Foundation, which is doing exemplary work, but by the governments,” she said.

“The key is to be prepared, and this means keeping up the investment and keeping the focus on global health, at all times. Even now, in these difficult times, with a completely different focus.”

She ended by highlighting the Pandemic Preparedness and Response Fund which sees the European Commission and the United States committing to $450 million.

“And this is just the start,” she vowed. “With this reinforced funding, we will step up globally the surveillance of cross-border health threats, the strengthening of health systems, and most importantly the support in training and education.”

This comes following news that the EU has vowed to provide Ukraine with €18 billion in financial aid for 2023 as the country continues its defence against Russia.

European Commission President Ursula von der Leyen announced that assistance will be supplied to Ukraine to help them cover the basic budgetary needs of the war-torn country.

She announced the aid at the end of a two-day meeting of EU leaders in Brussels. “It is very important for Ukraine to have a predictable and stable flow of income,” von der Leyen said.