Johnny Depp to tour the UK and Europe with his Hollywood supergroup including Alice Cooper. 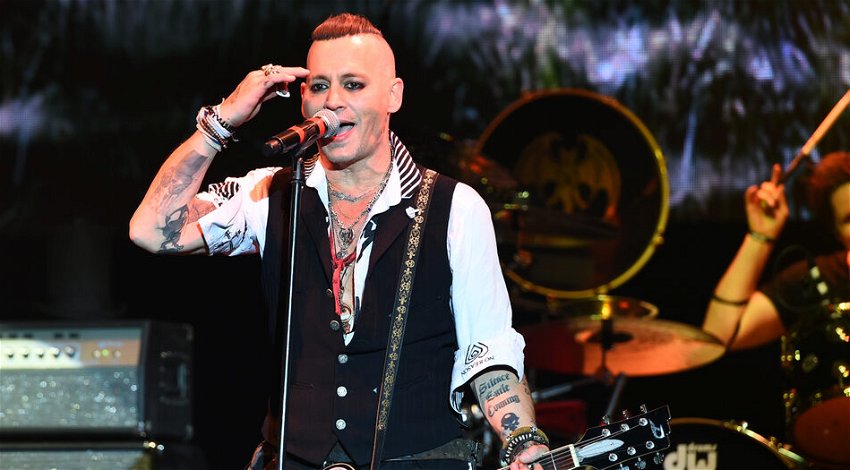 Johnny Depp is to tour the UK next year after the original tour dates were postponed due to the pandemic.

The announcement, which was made on Monday, October 24, said that the tour will begin in Scarborough in July 2023.

Depp’s celebrity band is made up of Alice Cooper, Aerosmith’s Joe Perry and Depp, but will also be joined by guitarist Tommy Henrikson who has played for Alice Cooper and others. Henrikson has also released a number of solo albums.

During the case Depp appeared onstage with Jeff Beck and has since announced that the pair have recorded an album together.

The actor, who lost much of his work during the notorious suits filed against each other, has changed his appearance is working hard on a comeback. Most notable was his being dropped from the Pirates of the Caribbean franchise.

Rumours abound of his return to franchise such as Fantastic Beasts, however, as yet nothing has been confirmed.

The new tour will apparently feature some of their own material as well as playing tribute to some of the “great lost heroes of music.”

Cooper is said to be enthusiastic about the tour and told Sky News: “Well, it’s already been three years since the Vampires have toured because of COVID.

“I can’t wait to get back with the guys, I really love being in that band. My band is great and wonderful but playing with the Vampires is an entirely different situation.

“I don’t necessarily do any theatrics at all, I’m just the lead singer, in a band, and the band just happens to be one of the best bands around! It’ll be great to see Johnny and Joe and Buck and Chris and all the guys.

“We’ll be rocking these places, especially the UK, I can’t wait to get to the UK! Lock your doors, put garlic all around, because the Vampires are coming!”

Perry added: “We can’t wait to play the songs from our latest album, Rise, for all our fans across the pond.

“The excitement builds as we count down the days! See you all then… remember, leave the garlic at home!”

The tour is set to take in Swansea, Manchester, London, Birmingham and Glasgow before moving on to Europe including Germany, France and Switzerland.

Tickets for Johnny Depp tour of the UK with his Hollywood supergroup go on sale on Friday 28 October at 10am.