Model and nutritionist claims her head exploded after having cosmetic surgery 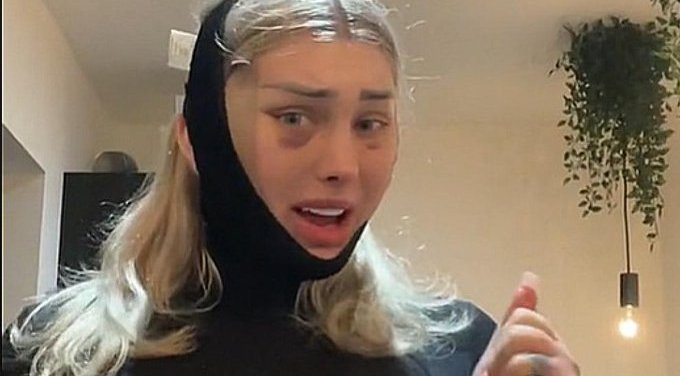 A model and nutritionist known only as Weronika has claimed that her “head exploded” during a flight after she had cosmetic surgery.

Weronika claimed on Monday, October 24 that on her return from having plastic surgery in Turkiye, that the stitches erupted.

She travelled to have her bottom enlarged and lifted, as well as to her eyes stylised in a procedure called canthoplasty. The operation is intended to create more of a feline look but has left the model scarred after the hospital concerned told tell her that she could fly.

Her story, which has had more than eight million hits on social media, is a warning to others travelling for plastic surgery. The surgery involved making an incision behind the ear.

Saying the whole incident was scary, she said: “I heard an audible bang and my heart was like [beating fast], and I said, ‘What the hell is going on?

“Immediately after the sound, I started to feel this hot liquid dripping down my neck… It was obviously blood.

“I felt a lot of pain for the rest of the flight,” adding that the blood also included a yellow substance. She c continued saying that she put the bandages back on until she landed.

“It felt so hot and all that fluid was draining into this tissue. Honestly, it was disgusting.”

Although she has said that it was the pressurised cabin to blame, the reality is that the drainage incisions had not worked as intended resulting in the area becoming infected.

With more and more people travelling to take advantage of “cheap” plastic surgery, the story of the model and nutritionist who claims her head exploded is a warning to others with specialists saying this is not a decision that should be made lightly.