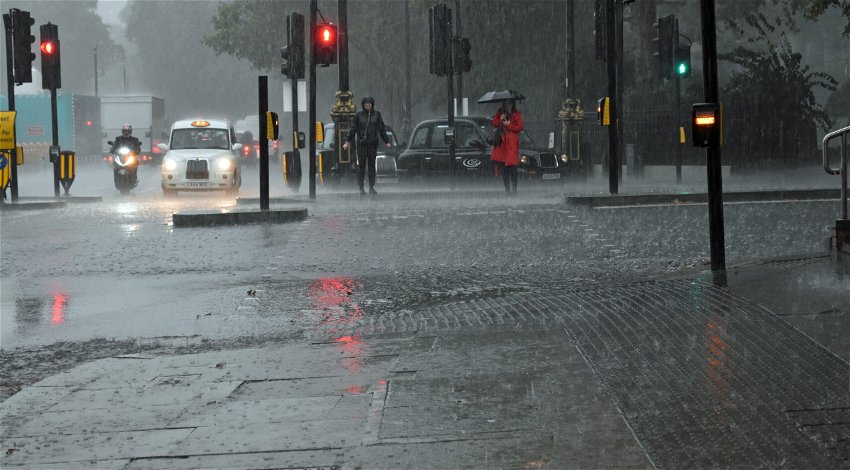 Watch London being battered by 'biblical rain' as the UK is hit with 'worst ever' thunderstorm. Credit: D MacDonald/Shutterstock.com.

VIDEOS have emerged of London being battered by torrential rain as a heavy thunderstorm hit parts of the UK.

Sunday evening saw the epic downpour in the capital, with many screaming as they attempted to seek cover from the rain, which has been described as “biblical”.

Umbrellas were futile, as discovered by a group of people attempting to shelter from the storm outside St Pauls in Central London, while rain that appeared to be going sideways due to the wind.

Another video sees someone purported to be driving through Peckham through a large amount of rainwater.

The Met Office announced a yellow weather warning today (Monday, October 24), with a flood alert in place from the Environment Agency and some rain forecast for the rest of the day in most parts of the UK.

This is Embankment Station. Very impressive storm intensity for this late in the year especially.

Ahead of the storm they said that there is a possibility that floods could affect some homes and businesses, and that lightning strikes, hail, and strong winds could bring power cuts.

Alex Deakin from the Met Office told The Mirror that a “large area of low pressure” will be sticking around “because of the position of the jet stream”, which is progressing across the Atlantic and keeping the current weather front in place.

He added: “Fast forward to Monday and the pressure hasn’t really changed very much. The low has shifted a little bit further north. There’s another one spawning out in the Atlantic and the jet stream hasn’t really shifted either.”