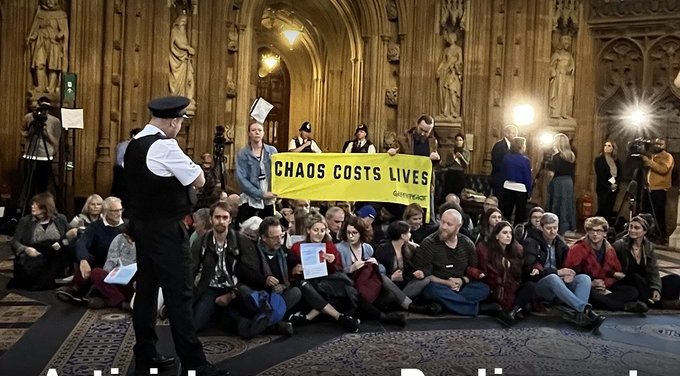 Police have intervened to stop Sky News from recording protests in parliament by Greenpeace activists.

The protest on Monday, October 24 was held to raise awareness of the plight of people in fuel poverty whilst MPs quibbled over policies and leadership.

Many are concerned that the government has been distracted by its own problems leaving many struggling to pay their bills. Greenpeace along with many others want to the government to change tack and to give more support to those in need of it.

The protests were timed to coincide with the appointment of a new party leader and prime minister.

🚨 BREAKING: Over 30 activists have occupied parliament.

While the government is in chaos, almost 7 million people are facing fuel poverty.

We need the next government to deliver a proper windfall tax to insulate homes and keep people warm this winter.#ChaosCostsLives pic.twitter.com/A1kF6AYT9Y

In a rather odd incident, a policeman tried unsuccessfully and illegally to stop a news team from broadcasting at the event, providing some light entertainment for those worried about recent events and the future direction of the government.

🚨VIDEO: UK Parliamentary security try to stop @SkyNews from broadcasting during a sit in protestpic.twitter.com/cVtD4GCwCt

The protests were replicated elsewhere with those opposed to fossil fuels and other government policies continuing their programming of blocking transport routes and damaging valuable artworks. As with others the police had intervened, this time to stop the recording of parliament protests.