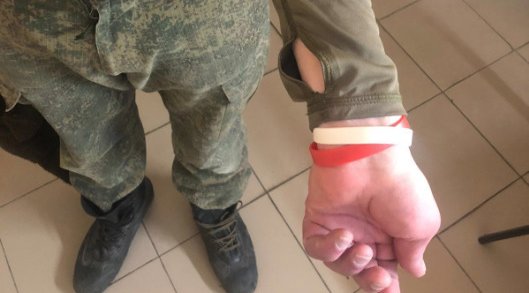 RUSSIAN prisoners recruited by Wagner Group mercenaries are reportedly suffering from serious infectious diseases, in particular HIV and hepatitis C, according to reports from Ukraine on Tuesday, October 25.

The Wagner Group – a network of mercenaries and a de facto private army of Russian President Vladimir Putin – have reportedly recruited prisoners from Russian prisons suffering from serious infectious diseases, in particular HIV and hepatitis C.

According to information gathered by the Main Directorate of Intelligence of the Ministry of Defense of Ukraine, Russian military officials have been forced to mark such sick fighters with appropriate bracelets on their arms.

“Thus, only from one correctional colony №5 in the village of Metallostroy, Leningrad region, more than a hundred prisoners with confirmed HIV or hepatitis C were “mobilised” to the PMC “Wagner”.

“To “mark” infected militants, the command of the “Wagner” forces them to wear red bracelets in case of HIV, and white – in case of hepatitis.”

It added: “Among other militants who are forced to serve alongside the infected, there is growing indignation at this situation. It is known that Russian doctors systematically refuse to provide assistance to the wounded with hepatitis or HIV.

“Captured militants with HIV and hepatitis have already been found in Ukraine, which confirms the information about mass “recruitment” of infected prisoners to the PMC “Wagner”.”

Earlier this month, a former Russian prisoner, who said he had been recruited personally by Wagner Group founder Yevgeny Prigozhin, said all recruited prisoners were being used as “cannon fodder” to reconnoitre Ukrainian positions on the front line.