Watch update: Hero Ángel Martín has died from his burns after trying to save a petrol station in July 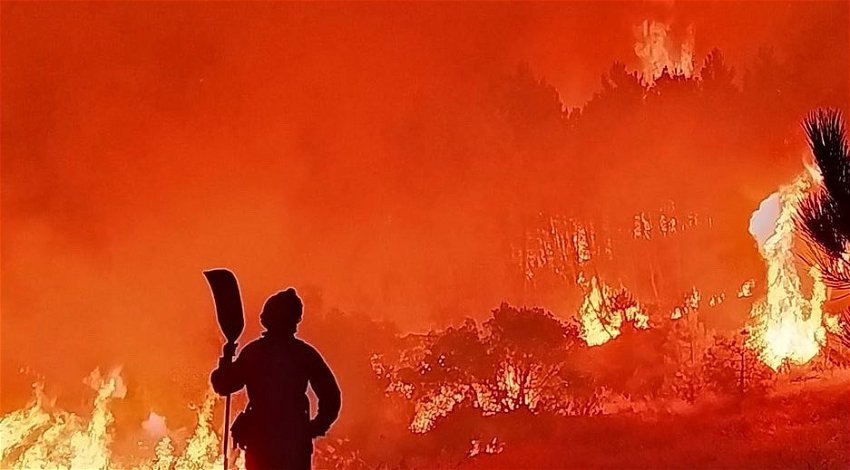 12:20 (October 25) – Ángel Martín the hero who tried to stop the flames from engulfing a local petrol station during the summer’s fires, has finally succumbed to his burns.

According to news site El Espanol, Martín died on Monday, October 24 at the Río Hortega Hospital in Valladolid at the age of 53. Martín was engulfed by the flames on July 17 when he tried to use his backhoe to create a firebreak as the flames sped towards the local petrol station, threatening the lives of villagers. But the flames fanned by strong winds were travelling too fast and quickly overtook him and his vehicle. He managed to escape the flames but suffered multiple burns to his body. Locals quickly rushed him to hospital where he had been ever since. Multiple operations and numerous interventions to try and save his life were unsuccessful.

Sadly, he died unnecessarily after the wind changed direction and took the flames away from the village and the petrol station.

Martín becomes the fourth vitim of the fire that day along with Daniel Gullón Varas, a fire brigade member ; pastor Victoriano Antón, whose body was found the next day; and Eugenio Ratón, who had been injured while fleeing the fire with his centenarian father and died a month later in hospital, after failing to recover from his injuries, as did Ángel.
He will be fondly remembered in the village for his valiant efforts to save the village from the rapidly advancing flames, on a day that devasted the local area.

President of the Junta de Castilla y León, Alfonso Fernández Mañueco, said Martín  was a fighter and a hero and he wanted to send his condolence. He said online that he lamented “deeply” his death and sent condolences to his family and friends.

3:53 pm, July 19 – Local hero Angel was trying to save a gas station from the flames when they caught up with him and his excavator.

According to a friend who spoke to 20 minutos, Ángel Martin Ballestero was trying to clear a path between the flames and the gas station but with winds of 30 to 40 km/h they caught up with him.

Ballestero is apparently in hospital having suffered 60 per cent burns over all of his body, but miraculously still alive.

With more than 30,000 hectares already raised to the ground, Ballestero and the residents of Tábara did what they thought best to try and save their town. A call went out to bring what you have to try and fight the flames, and Ballestero was one of those who answered the call.

Peña, Balletero’s friend said he was trying to save the petrol station from exploding, which in the end was saved due to a change in wind direction. The fire Peña said, was just 300 metres away from the station when the change in the wind direction came.

“What he wanted was to tear up the first layer of dry grass with the shovel and for it to come out from under the ground, which doesn’t catch fire.”

Ballestero is said to be fighting for his life and is currently in critical condition in the burns unit of a hospital. Peña spoke fondly of Ballestero who he said: “Is from Tabara, he and his wife have a construction material store where I buy regularly. His daughter and my daughter are currently together in a camp about 60 kilometres toward León. We have spoken with his wife, we will take care of the girl when we have to go pick them up.”

According to local sources, much of the agricultural land has been destroyed with oats, wheat and barley all having gone up in smoke. Thankfully the homes have been saved but the damage has been done.

Ballestero was taken to hospital by the mayor of a nearby town in his SUV seating him as best he could without causing him further injury. By all accounts, those who travelled with him, said that he was most concerned about what his wife would say.

Locals say it is a miracle that not only did hero Ballestero survive but that their homes were spared by a change in wind direction.

But now the clean-up begins with many having to rebuild their lives having lost their crops and potentially their farms.

7:46 am, July 19 – Authorities have been warning about the dangers of wildfires advising residents not to attempt to tackle these without the right training and equipment.

A video posted on Tuesday, July 19 shows the reality of a wildfire, how quick it can move and just how quick it can engulf what is in its path. A man in Spain was trying to safeguard his hometown from the fire by clearing the ground, however, the flames moved too quickly engulfing his excavator in seconds.

Luckily for Angel Martin Arjona, he managed to escape losing most of his clothes in the process. Thankfully he appears not to have suffered major injuries but the story could have been very different.

WARNING: GRAPHIC CONTENT – Video footage shows Angel Martin Arjona, a Spanish man who was trying to safeguard his town from a wildfire, having a close brush with death when a wildfire engulfed his excavator https://t.co/8WhaHK7nit pic.twitter.com/yyUm3ucGah