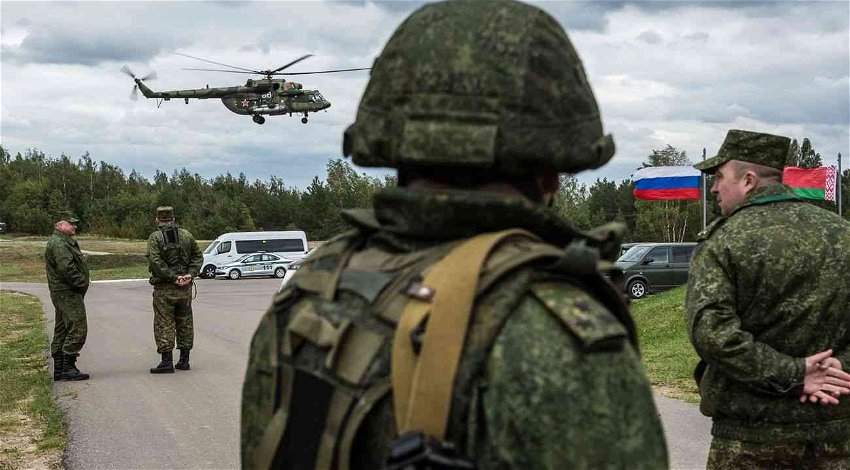 Belarus mocked by Ukraine for 'not having properly equipped "strike force" to launch offensive'. Image: gur.gov.ua/Official

Currently, Belarus does not have a “strike force” that would be properly equipped for an offensive, according to Andriy Chernyak, a representative of Ukraine’s Main Directorate of Intelligence of the Ministry of Defence.

After mocking Belarus for not having a “strike force” that would be properly equipped for an offensive in Ukraine, Chernyak told RBC-Ukraine that Russia’s ally “conducts personnel training in order to divert Ukraine’s attention and forces from the east and south.”

According to the representative of the GUR of the Ministry of Defense of Ukraine, since April, Alexander Lukashenko has regularly tried to avoid an open invasion of Ukraine, “despite the fact that he became a participant in this war a long time ago when he gave his territory to Russia.”

Chernyak said: “Of course, there is a potential danger from Belarus for Ukraine. Attack UAVs purchased by Russia from Iran are launched from the territory of the Republic of Belarus, MiG-31K aircraft, which can carry Dagger missiles, have been moved there.”

As previously reported, Russia has already sent citizens to Belarus that were recently drafted into the Russian military under orders of President Putin.

These people do not have proper weapons or equipment, Chernyak noted.

“They are brought in by rail,” he said.

“At the same time, tanks and armoured personnel carriers repaired in Belarus are sent, on the contrary, to Russia,” explained the representative of military intelligence of Ukraine.

On Saturday, October 15, the Belarusian Defence Ministry released footage showing the arrival of the first group of Russian troops in Belarus for the ‘joint regional group of forces’ announced by Lukashenko and Putin.

The Belarusian Defence Ministry published the footage alongside the words: “The servicemen were warmly welcomed with bread and salt.

“The decision to establish a regional grouping of troops (forces) was taken to strengthen the protection and defence of the state border of the Union State within Belarus. The decision was taken due to the continued activity in the areas bordering with us.”