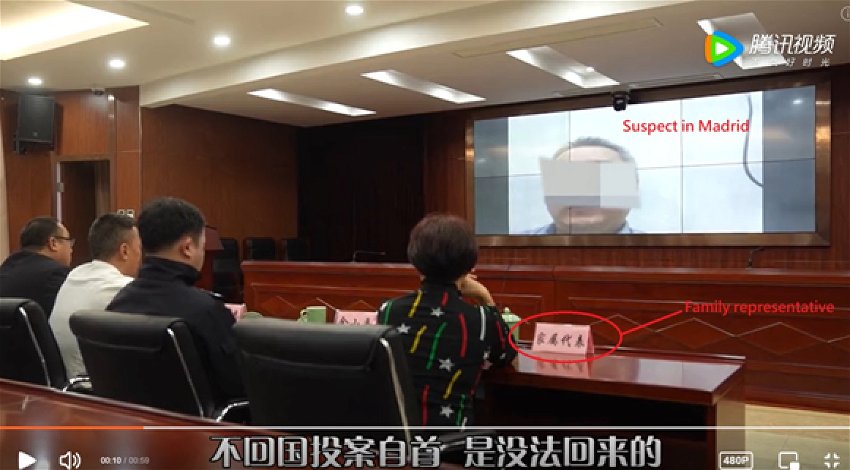 A suspect living in Madrid being encouraged to return to China Credit: Safeguard Defenders

CHINESE police allegedly run 30 illegal stations around the world including nine in Spain and at least two in the UK.

According to Madrid based NGO Safeguard Defenders, these exist under the eyes of different Governments with the intention of ‘persuading’ alleged criminals to return to China to face justice.

The campaigning group which is being taken very seriously has grown from a group called China Action which was formed in Beijing in 2009, by human rights activists Peter Dahlin from Sweden and Michael Caster from the U.S. and a small group of Chinese rights lawyers and other human rights defenders.

They offered free legal advice to those targeted by Chinese police and politicians but in 2016 according to them, following a major crackdown, many of their staff and partners were detained, disappeared or imprisoned.

They regrouped in Madrid and founded Safeguard Defenders with the specific aim of trying to highlight Human Rights Abuse in China as well as other Asian countries.

Working covertly, they have identified these 30 stations operating mainly in Europe as well as North and part of South America and whilst they are not actually called police stations, they are affiliated to Chinese police and many of their staff are former officers.

Earlier this month, Spanish newspaper El Correo investigated the role of the Spanish stations and published a statement from an anonymous official in the Chinese Ministry of Foreign Affairs in Shanghai who confirmed their existence and said “The bilateral treaties are very cumbersome and Europe is reluctant to extradite to China. I don’t see what is wrong with pressuring criminals to face justice.”

There is little doubt that so called ‘criminal activities’ are likely in many cases to consist of written or verbal criticisms of those in power in China and many who are contacted are warned that friends and family remaining in China may be guilty of crimes by association which often prompts the individual to return to his or her homeland.

Conservative MP and former leader of the party Ian Duncan Smith has expressed his worry about the alleged stations established in the UK (London and Glasgow) and tweeted” I will be hosting a session in Parliament on 17th November to take evidence from those who produced this important report into illegal Chinese police stations operating in the UK.”

The view of Chinese officials on their ability to try to control protestors even in the UK was highlighted when one was dragged into the Chinese Consulate grounds in Manchester and reportedly beaten as recently as October 17.

Thank you for reading’ Chinese police allegedly run 30 illegal stations around the world’ and remember that all articles produced by Euro Weekly News may be accessed free of charge.