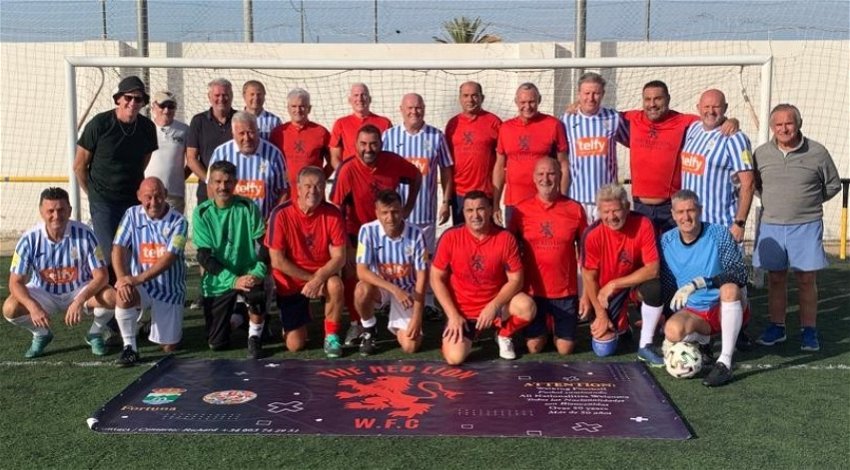 This Saturday, ​29th,October all roads lead to the Torrevieja Sports City  for the Costa Blanca`s biggest ever Walking Football Tournament for the Torrevieja Trophy.

​It is sure to be competitive with teams from the Costas Blanca and del Sol, Murcia, England  and the Basque Country.

The Tournament kicks off at 10 am with two cracking matches to get the excitement going. In Group A  Athletic Club (Basque) meet Hartshill (Birmingham) and Group B El Cañadon (All Spanish team from the Costa del Sol) v Morecambe (England).

This will be a tight group with three local teams competing with English and Spanish opposition.

Matches are 20 mins and the teams will progress to the Play Offs to decide who will collect the trophy and for the Second and Third Places. The Play Offs will kick off at 2.15pm with the Final kicking off at 4 pm followed by the Trophy Presentation.

CD THADER March on. Thader`s third match since being formed saw them visit the Red Lions of Fortuna on Monday 17th October and come away with their third win in succession. In a close end to end game it was Thader who settled first hitting two goals in the first five minutes.

Fortuna were back in the game 10 minutes later pulling a goal back. However just before half time Thader went further ahead quickly increasing their lead to 4-1.

It was goals a plenty in the second half with the hosts pulling the score back to 4-3 with some slick incisive passing before Thader hit back with three quick goals to make it 7-3 with Fortuna adding a consolation goal to make the final score The Red Lions of Fortuna 4 CD Thader 7 leaving Thader unbeaten in three matches.

Ray Glover was voted Man of the Match.

Last Wednesday,19th October Formentera WFC visited San Flugencio for a friendly match on the refurbished pitch at La Marina. Formentera much  improved from last season had a comfortable 7-1 win.

For all news of walking football on the Costa Blanca make sure you get YOUR copy of the Euro Weekly News.”