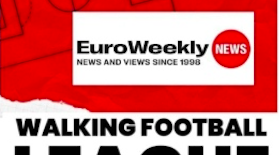 Sixty+ league: After intense pressure from Benahavis in the first half Torrox Tornadoes broke away with some good inter passing to go 1-0 up from an Andy Downing strike and took the lead into the break.

Within a minute of the second half starting Benahavis cut through the midfield and defense to equal the scores 1-1 , Torrox Tornadoes went ahead again after being awarded a running penalty taken by Andy Downing 2-1 .

Benahavis were awarded a running penalty but that was blasted over the bar , they then went on to apply pressure and were awarded a penalty again as a defender stood in the box this time saved by Johnny Basket the Torrox Keeper who made some remarkable saves during the match .

Benahavis managed an equaliser after some quick passing. 2-2 final score.

The third game in this league campaign saw Boca Seniors take on the very experienced and successful Walking Dead 50
Both teams started well with Walking Dead edging possession and territory.

It wasn’t long before they opened the scoring through a well worked free kick.

From then on, Walking Dead scored 4 further well taken goals at regular intervals.

These goals were mainly due to Boca Seniors being stretched with some fine inter passing from Walking Dead.
The two Boca Seniors goals came from well taken penalties by John Hamilton and Gary Sanderson conceded by Walking Dead for eight running offenses.

It was a good spirited competitive match and it was nice to see Some of the Walking Dead join us for a post match beer.
We look forward to playing you in the rematch. Last year’s league winners travelled to Nerja in the 50 league, Nerja Utd were very well organised and thoroughly deserved the 4-2 win, assistant malaga manager Terry Norrington said ” well deserved, they were snappier to the ball and the smaller pitch suited them.”

Malaga 60 drew 1-1 in the other game of the day. Plaudits to all goal keepers who pulled off some amazing saves. Malaga are currently bottom of the league having had 3 points deducted after Vinuela left the league.

For all other walking football news visit walkingfooty.com on Facebook.