Spare a thought for Ukraine’s animals who are starving, lost and traumatised 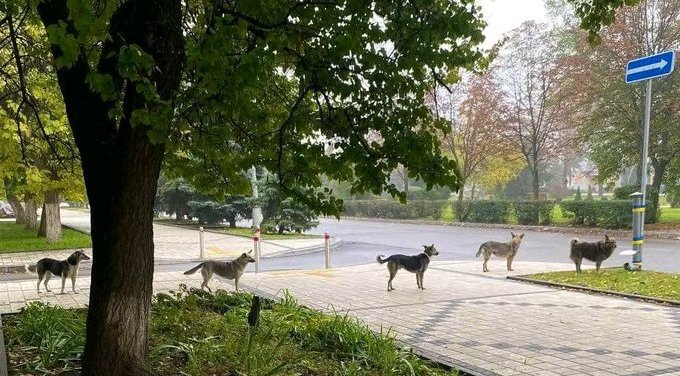 A thought should be spared for Ukraine’s animal population, the unseen casualties of Russia’s senseless bombing of Kyiv and other cities.

As bombing continues on Saturday, October 29 targeting the country’s energy supply ahead of winter, many of Ukraine’s residents will be facing their toughest challenge in decades.

But as the call goes out for help with blankets, heaters and other items that can help the country’s residents survive the cold, so too should the call go out for the many animals left homeless and traumatised by events.

A recent report by ITV and a viral photo posted online by a feeding station organiser in Kramatorsk, eastern Ukraine, have both helped to raise the plight and the level of donations desperately needed.

Nate Mook’s viral post of dogs waiting patiently in line to be fed has resulted in donations jumping ten times. He told ITV news: “I was blown away when I noticed the pack of dogs line up together.

“It’s incredible to me.

“I’ve never seen anything this this. It is amazing.”

I don't know if eyewitnesses managed to record this phenomenon, but in Kramatorsk, dogs lined up for food.

"I've never seen anything like it. Yesterday we installed a pet feeding station in Kramatorsk (with your support!). This morning, Ukrainian dogs stood in line to eat," pic.twitter.com/PalzK7VYqQ

An amazing sight indeed but also a reminder of the stark reality of the war in Ukraine. These well-behaved dogs have been abandoned by owners who have either fled the war or who have died in the conflict.

They are just a small proportion of the many animals, dogs, cats, horses and wild animals that have been left to fend for themselves, or who are reliant on the few who have the time and the will to look after them.

Charitable donations from around the world have seen tonnes of pet food shipped to Ukraine, but as the war carries on so the need remains and indeed grows.

According to Becky Thwaites, Head of Public Affairs at Britain’s Blue Cross told IT: “Pets left behind have been involuntarily forced to live within the harsh conditions of a deserted war-zone. The experience has left them malnourished, physically injured and mentally traumatised.”

Mook, who took the original picture while visiting friends, said: “It’s very difficult to approach the (animals) because are incredibly traumatised.

“They’ve just had to endure, in some cases, months and months of occupation or constant shelling and explosions.”

He added: “It was incredible to witness the animals find their way to the feeding station he set up.”

Over the moon with the response Mook is setting up more feeding stations as he expands his operations, but he is not the only one with similar stories from across the war torn country.

Ukrainian refugees will be overjoyed to hear of Mook’s exploits and those of others, with those who fled often not having been allowed to bring their pets with them. The UK for example does allow Ukrainians to bring their pets but quarantine requirements make it difficult for those already facing financial and other challenges.

All donations are gladly received by Nate Mook’s fund to support local Ukrainian animals, whilst those in the UK can donate via the Blue Cross Ukraine Pet Welfare Fund. Funds from elsewhere can be donated via Humane Society International, PETA, Ukraine Animals or at Save Ukraine where you will find a list of verified animal support organisations and others involved in providing humanitarian aid.

More and more abandoned paws are being rescued from war zones each and everyday, Animals are facing such a hard situation for their living. Assistance is really needed friends because prices of things like pets food are very high so please don't give up on us 🙏🙏 pic.twitter.com/02nVImcF7t

With Guy Fawkes around the corner, animal owners and lovers will be well aware of the trauma fireworks can cause. With that in mind spare a thought for Ukraine’s animals who are incredibly traumatised by daily explosions considerably louder and more dangerous than fireworks.