Demonstrators attacked and stabbed outside Iranian embassy in Berlin 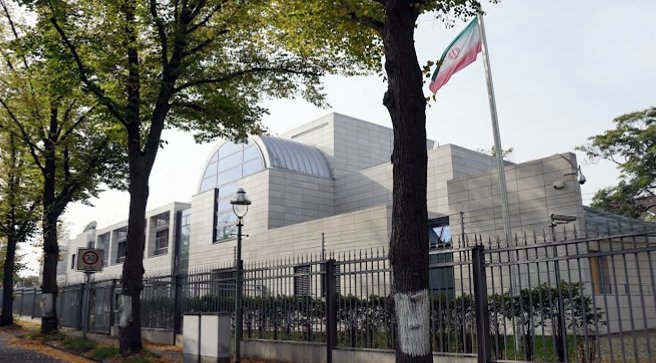 Demonstrators have been attacked and stabbed in the German city of Berlin while protesting outside the Iranian embassy.

A group of Iranian protestors was allegedly attacked and one of them stabbed late on Saturday, October 29, by three men suspected of belonging to the Iranian intelligence services.

The four demonstrators were holding a peaceful vigil outside the Embassy of the Islamic Republic of Iran in Berlin when the men reportedly arrived on the scene armed with knives and clubs and subsequently proceeded to assault several of them.

After tearing up anti-regime posters, the assailants reportedly made their getaway in a Porsche, leaving three people injured. A police investigation has been launched into the incident according to apnews.com.

As reported by AP News, a police officer guarding the Iranian embassy in Berlin claims to have witnessed three men wearing face coverings attack four people who were sitting inside a vehicle. They also tore down flags and banners being displayed by the protestors.

According to the German dpa news agency, the banners that were ripped down contained slogans widely used in the recent anti-government protests that took place in Iran. They apparently read, ‘Women Life Freedom’, and, ‘Iranians want democracy’.

Similar solidarity protests against the Iranian government’s treatment of women and dissenters have been staged in recent days in many European cities.

🚨Knife attack on #Iranian demonstrators in front of the Iranian embassy in #Berlin pic.twitter.com/7dQ8UWsht7

Five assailants with knives and sticks attacked a sit-in of Iranian protesters outside the Islamic Republic’s embassy in Berlin in early hours of Sunday, and stabbed one of them.
They then tore up anti-regime posters and left with their Porsche, a protester told @IranIntl_En. pic.twitter.com/mKvMupPX0s