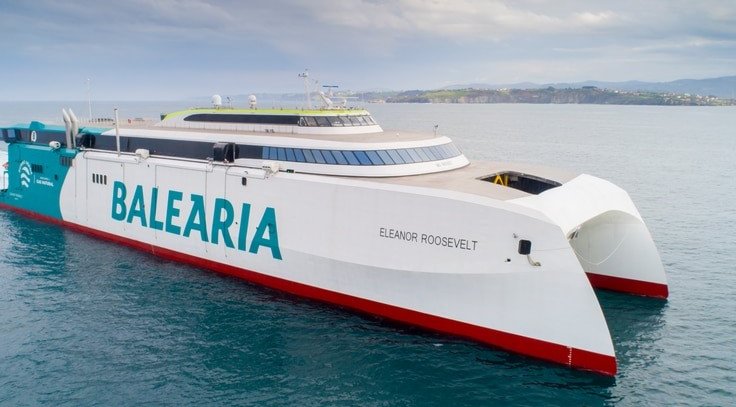 Denia’s ferry company Baleària, which runs services between the mainland and the Balearics, has started construction on a “greener passenger cargo ferry.”

The company announced on Monday, October 31 that it had contracted with the Armon shipyards in Gijón to build its second fast ferry, this time powered by natural gas engines.

Expected to begin operating in 2024, the ship will be named after pioneering biochemist Margarita Salas, famous in Spain and across the world for her work in molecular genetics.

A statement issued by Adolfo Utor, President of Baleària, said: “The ship will combine the most competitive features of the Eleanor Roosevelt with a series of novelties in its design and engineering to elevate the customer experience.”

The new ship he added, will benefit from the same innovation and co-efficient design of the Eleanor Roosevelt, which is: 123 meters long, 28 meters wide and is capable of transporting 1,200 passengers and 400 vehicles.

An addition is a second deck offering seats in the bow along with bar service, effectively doubling the outside area on the ship. That will also see the stabilising systems used in Eleanor Roosevelt being used as it will other innovations such as QR codes instead of tickets, video surveillance and free wi-fi on board.

Ten per cent more powerful that its sister ship, the Margarita Salas will have four dual Wärtsilä natural gas engines producing 9,600 KW. Using waterjets the boat will be able to reach speeds of up to 35 knots (65 km/h).

The ship will be the tenth in the company’s fleet that uses dual natural gas engines, a versatile technology that can also consume 100 per cent bio methane, as well as green hydrogen mixtures of up to 25 per cent.

The investment will see Denia’s ferry company Baleària maintain its position as one of the leading ferry companies in Iberia.