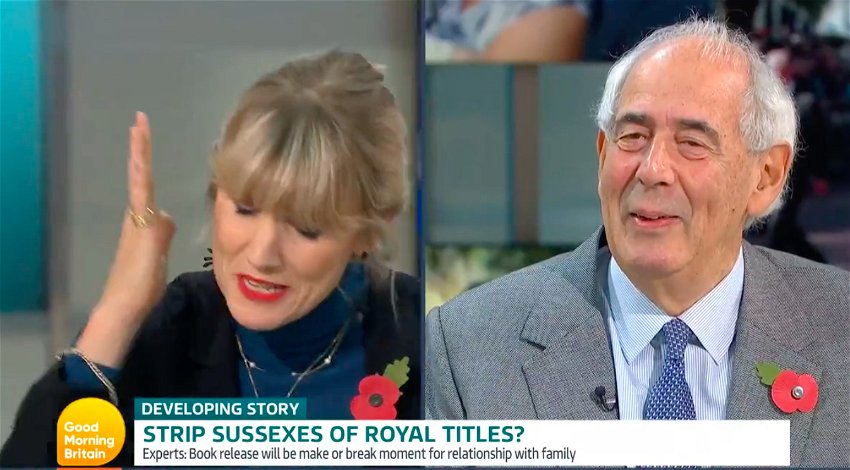 Good Morning Britain guests had a royal clash this morning as writer Tom Bower blasted Harry and Meghan over their hotly anticipated book.

Mr Bower criticised the Duke and Duchess of Sussex for their “hugely damaging” interview with Oprah Winfrey, before declaring that they should be stripped of their titles for “making money out of trashing the royal family”.

But historian and writer Tessa Dunlop hit back at Mr Bower, accusing him of “raking it in” off the couple’s “misfortune”.

The pair’s debate got heated on the ITV show, which is hosted by Susanna Reid and Ed Balls.

“We don’t know what the book is going to say, we’ve heard what he’s said before. He and Meghan and Oprah Winfrey said 17 inaccuracies and lies,” Mr Bower claimed.

“It was hugely damaging to the Royal Family and if you actually believe in the Royal Family as I do and think it’s one of the most important status symbols in the world, and reflects Britain’s status and values and everything.

“The couple in Montecito who are making their fortune solely by damaging and destroying the Royal Family to promote their own fortunes, their own prestige, and their own brand. I don’t think they should be allowed to call themselves the Duke and Duchess anymore.

“They make their money by parading themselves as the Duke and Duchess and the Prince.

“If they want to make their money out of trashing Britain, then why should they be recognised as the Duke and Duchess?”

'They're a different generation…Let them be.'

Historian Dr Tessa Dunlop argues against Tom Bower's comments by saying that people need to let Harry and Meghan be.

What do you think? pic.twitter.com/HGvsHeJZ8r

He cut in to say: “But Tom, you’ve written books in which you’ve made money and both were quite damaging to the Royal Family.

“You’ve not got a title we can strip from you.”

Ms Dunlop launched into a tirade of criticism on the writer, saying, “accuse them of rank hypocrisy because that is exactly what it is”.

“You talk about them making their fortune in Montecito, arguably Harry with good reason, he’s had a pretty rough ride in his young life,” she began.

“Meanwhile you sit there in your little establishment position raking it in off the back of their arguable misfortune or fortune, depending on how you spin the coin.

“I saw you masquerading as an expert in the Sun pretending that you know what is in this book, saying that their titles should be stripped.

“They’re a different generation than you, Tom. Let them be.”

Mr Bower hit back claiming that the couple “make money by lying” whereas “I don’t lie in my books.”

Good Morning Britain airs on ITV on weekdays from 6am local time.