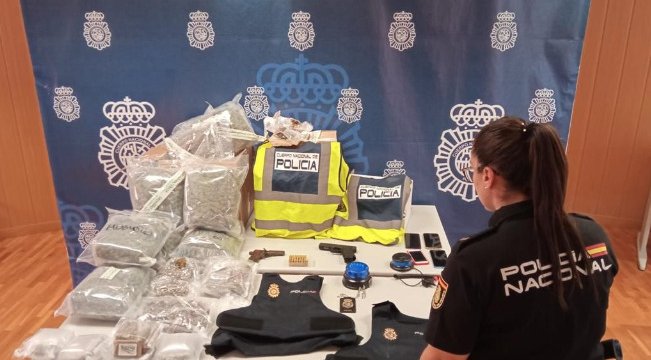 A CRIMINAL gang operating in Spain’s Costa Blanca has been dismantled after they had posed as Spanish police officers to rob rival drug gangs.

The National Police in Elche dismantled a criminal group operating in Costa Blanca that specialised in committing “vuelcos” (robberies) of drugs to other drug gangs posing as police officers, as reported on Tuesday, November 1.

Eleven people have been arrested in the operation in Elche, Murcia and the region of Vega Baja.

Police were tipped off to the gang after receiving a call from a warehouse worker in the Carrús industrial estate in Elche who alerted them to a possible robbery being committed in a neighbouring warehouse.

The worker told police that he had seen several hooded people wearing balaclavas and provided the details of a van in which they were travelling, as well as the direction of escape.

Police caught up with the van but when they were spotted, two of the suspects darted for another vehicle to try to continue their escape.

However, police officers were able to cut them off and prevented them from reaching the vehicle, whereupon the two suspects attempted to flee the scene.

The officers were able to arrest the two suspects along with the driver of the van.

Those arrested were young Spaniards aged between 26 and 29.

The news comes after National Police arrested a 39-year-old man in the Alicante town of Elche for allegedly renting previously evicted homes.

On Thursday, October 27, it was reported that the man allegedly located empty homes in Alicante’s Elche that were left uninhabited after the previous tenants had been evicted and then began renting them out illegally.