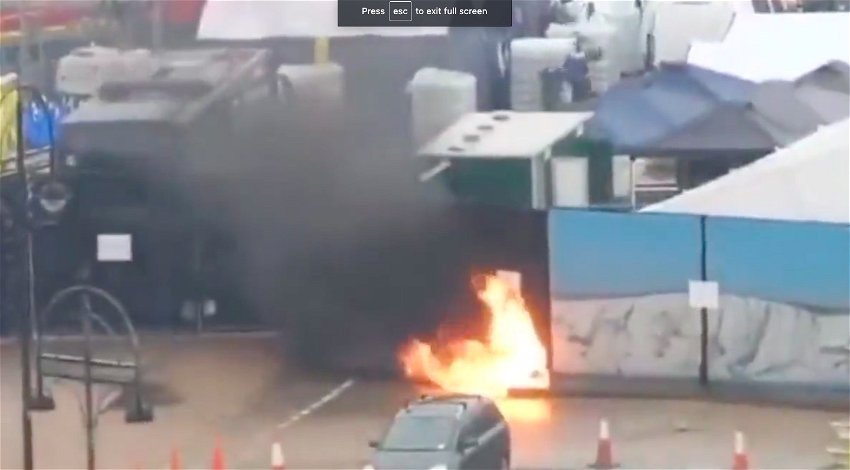 A MAN petrol bombed a UK migrant processing centre in the English port of Dover before killing himself.

“Loan wolf” Leak travelled from his home in High Wycombe, Buckinghamshire, to Dover in Kent to “throw incendiary devices at the migrant centre”, reports The Sun.

The suspect was found dead at a nearby petrol station shortly after the arson attack, which happened on Sunday.

The investigation is being led by counter-terrorism police after a “number of items of interest were recovered” from his home, including digital media devices.

Detective Chief Superintendent Olly Wright, Head of CTPSE, said that while the incident was targetted, it “may not necessarily meet the threshold of terrorism”.

“This was a traumatic incident for everyone involved and the wider community, and we’re working hard to establish exactly what led to the events on Sunday morning,” said Detective Chief Superintendent Wright.

“We understand that when Counter Terrorism Policing become involved, it can be worrying for some people, but I would like to reassure people that there is nothing to suggest any ongoing wider threat at this time.

“What appears clear is that this despicable offence was targeted and likely to be driven by some form of hate-filled grievance, though this may not necessarily meet the threshold of terrorism.

“At this point, the incident itself has not been declared a terrorist incident, but this is being kept under review as the investigation progresses.”

Dover petrol bomber named after it’s revealed he was ‘questioned by police’ before attack https://t.co/4EdH5msZDn pic.twitter.com/uvWl1DIooG

Original story – The incident happened at around 11.20am on Sunday which saw Kent police and fire and rescue services tackle the blaze into the afternoon. A bomb disposal unit was also at the scene.

The man was seen throwing petrol bombs at the centre, named Western Jet Foil, which has been confirmed by police as ‘two or three incendiary devices’, which were attached to fireworks at the border force centre.

He was seen by a Reuters photographer, who says that the man then killed himself at a petrol station, around 200 metres from the scene of the incident.

The news agency reported that the man “tied an improvised noose around his neck, attached it to a metal pole and drove off, killing himself”, according to the photographer.

BREAKING: Kent Police have confirmed that several petrol bombs have been thrown at a migrant processing centre in Dover.@IvorBennett shares the latest updates from Kent.https://t.co/PAiZ4D1jU3

The centre is the first port of call for all migrants arriving in the UK after crossing the channel – it is where their asylum claims are processed.

A spokesperson for the Home Office said in a statement: “We are aware of an incident at Western Jet Foil processing centre.

“Police are in attendance. It would not be appropriate to comment further at this stage.”

It is unknown at this stage the man’s name or motive for his actions, however, local police said they were not treating it as a terrorist incident and were keeping an open mind.