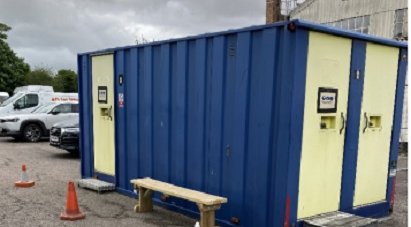 13:13 (November 1) – It just couldn’t get worse for the home secretary as local councils take Home Office to court over hotel block bookings.

Emergency injunctions are being sought by among others, Stoke City Council and Great Yarmouth Borough Council to prevent the Home Office from using hotels in their areas. According to the Local Government Association the councils are not being notified in advance by the Home Office, which is putting local councils under pressure and in difficult situations.

The news of the injunctions follows the announcement by the Immigration Minister Robert Jenrick on Sky News that more hotel rooms are being urgently procured to relieve pressure on Manston.

Ipswich Borough Council is one of those councils, which was given an emergency injunction to stop the four-star Novotel Hotel in Ipswich or “any other hotel in the borough” being used to house asylum seekers.

A spokesperson for the council said that the injunction is in place until the High Court hearing on November 7. They added: “This is the latest stage in the council’s efforts to prevent the government from turning hotels into a hostel for asylum seekers.”

10:54 (November 1) – The Home Secretary has been accused of refusing to book hotels for migrants because they were “in Conservative areas.”

A senior government source has told news radio LBC that Suella Braverman had been presented with a number of options to try and resolve the situation in Manston, however she wouldn’t approve those in Conservative seats.

The claims have been denied by the Immigration Minister Robert Jenrick, however, the source said that the policy is not new with it having been introduced by former Hoem Secretary Priti Patel.

The source said Patel “kept telling officials over the summer she wanted migrants out of hotels, but there is nowhere else for them to go.

“She refused to sign off on them and the reason is because they were in Tory voting areas.” They continued saying facilities had been signed off recently as they were in Labour heartlands.

A prison officer sources also told LBC that the reception centre is designed to handle around 400 people, with a push 600. Currently the centre is home to more than 4,000 migrants.

Whatever the truth behind the story, it is clear that the home secretary will remain under pressure whilst the situation exists. What is also clear is that a new approach is needed in dealing with the influx of migrants, with the government seemingly unwilling to heed the advice of those in the legal and charity sectors who provide assistance to the migrants.

08:27 (November 1) – The home office and the Home Secretary Suella Braverman remain under fire despite her denials in parliament overnight.

The home secretary said the country was “being invaded” by asylum seekers and that she would put a stop to it, at the same denying that she had ignored legal advice or stopped funding facilities suitable for housing migrants.

Reports by a number of media agencies including Sky News and the Telegraph have called on the minister to “get a grip” on the situation at the Manston migrant processing centre.

A report by the HM Inspectorate of Prisons found that detainees were being treated inhumanely by not being allowed to close toilet doors fully and having to sleep on the floor with no beds provided.

Furthermore, migrants were stopped from using their phones to contact families or to let them know they were safe, whilst others waited for more than 30 hours to be processed.

The centre is only supposed to hold migrants for 24 hours before moving them to safe facilities, however that target isn’t being met with more than 4,000 people currently being held in a facility designed for 1,000.
Migrants are being provided food and water as well as being given access to ablutions, but most do not have beds and there is nowhere for them to exercise or to get fresh air.

Migrants who have left the centre say that disease is rife and that some asylum seekers are a threat to others, often carrying weapons.

11:39 (October 31) – The UK is said to be considering housing asylum seekers by booking individual rooms in hotels rather than hiring the entire hotel, on Tory MPs criticise their own government’s asylum policies.

Sir Roger Gale, Conservative MP for North Thanet in Kent visited the Kent asylum centre processing centre according to the Guardian on Monday, October 31. Speaking after the visit he said the problems were caused by the Home Secretary’s “car crash” decisions.

The centre he said is overcrowded with some 4,000 asylum seekers now housed in the facility, adding: “There are simply far too many people [at Manston] and this situation should never have been allowed to develop.

“And I’m not sure that it hasn’t almost been developed deliberately.”

Speaking on BBC Radio 4’s Today programme he elaborated on his criticism saying: “I was told the Home Office was finding it very difficult to secure hotel accommodation.

“I now understand this was a policy issue and that a decision was taken not to book additional hotel space.

“That’s like driving a car down a motorway seeing the motorway clear ahead. Then there’s a car crash and then suddenly there’s a five-mile tailback. The car crash was the decision not to book more hotels space.”

The MP said he was unaware whose decision it was, whether it was the current or the previous incumbent, however, that was clarified by the Government Minister Mark Spencer who acknowledged that current Home Secretayr Sueela Braverman had “put the block” on housing asylum seekers in Manston in hotels.

He said that she had claimed it was because she wanted to “process them quickly.”

Source s within government have also told the main networks that the change in policy also includes putting a stop to block booking hotels, and that consideration was given to making individual bookings.

That change would see asylum seekers joining other paying guests in using the same hotel and facilities.

The comments will put further pressure on the under fire right wing home secretary, with Gale saying: “We need a grown-up solution to what is a very real problem. And it is a problem, there’s no doubt about that.

“People’s lives are being placed in danger, for a start, in crossing the Channel. And the situation is becoming out of control … We’re not going to do it by knee-jerk, dog-whistle politics.”

The comments were made on the same day that over 100 charitable organisations involved in working with and assisting asylum seekers and refugees, to implement changes that provide safe pathways and dignified treatment, whilst at the same time dealing with the trafficking problem.

The news that the UK is considering housing asylum seekers along with other hotel guests, is unlikely to be well received and could well be another of those policies that never sees the light of day.