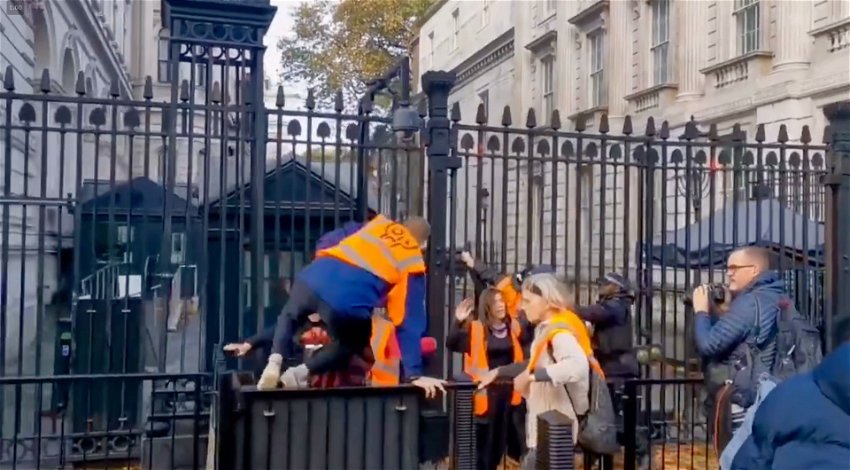 The action today follows the announcement that BP saw huge profits of £7bn in the last quarter while paying £700m in windfall tax on its North Sea operations for the whole year.

A Just Stop Oil spokesperson said: “Rishi Sunak is about to U-turn on attending COP27. We demand that he also U-turns on new oil and gas. This genocidal policy will kill millions of people while failing to address the worst cost of living crisis this country has ever seen.

“It’s time for a serious windfall tax on big oil, without the get-out-of-jail-free tax credits that will encourage more oil and gas that we cannot afford. Vulnerable people will be freezing to death in their homes this winter, unable to afford a can of soup while his government refuses to tax the rich and the big energy companies that are profiting from our misery.

“We are not prepared to stand by and watch while everything we love is destroyed.”

🚧 At 11:15 this morning, 22 Just Stop Oil supporters swarmed towards the gates of Downing St. A number of them attempted to scale the gates while others sat down in the road to block the entrance, with some gluing their hands to the tarmac pic.twitter.com/KzxtOUpQdH

The video, posted by Just Stop Oil’s Twitter page, shows police running to the gates and moving the protesters off the premises, some of whom were dragged across the ground. It is unknown how many, if any, were arrested for the stunt.

This comes just over a week after four activists from the Just Stop Oil group were arrested by the Met Police after gluing themselves to the iconic Abbey Road zebra crossing in London.

London’s Met Police arrested the activists on Sunday, October 22, who donned orange high-viz jackets and mimicked the pose made famous by the Beatles on their 1969 album cover before gluing themselves to the tarmac.

The incident occurred at around 1pm with the protestors blocking the road, leading to angry responses from motorists who were subsequently unable to pass.