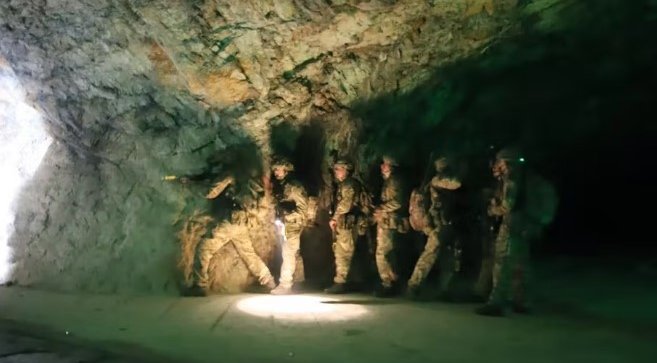 Gibraltar’s tunnel systems were used as a location for British soldiers to perfect their fighting skills.

As reported in the UK Defence Journal on Tuesday, November 1, reconnaissance troops from the 1st Deep Recce Strike Brigade were deployed on the Brigade’s first overseas training exercise abroad since it was formed in the summer. They used Gibraltar’s tunnel systems to help perfect their fighting skills.

A total of 104 soldiers from The Royal Yeomanry and 1st the Queen’s Dragoon Guards arrived in the British Overseas territory of Gibraltar where they practised their combat and reconnaissance skills in an urban environment.

Gibraltar’s tunnel system was used to challenge the soldiers and test their ability to fight in darkness. Underground training has been a part of military training for many years and with restricted views, narrow choke points, and close enemy engagements, it takes time to master.

In a press release, the British Army said that a Lance Corporal stripe is on the horizon for 24 of the soldiers who went to Gibraltar as Troopers, After completing the Army Leadership Development Programme, they returned to their units ready to be promoted.

Corporal Searle was quoted as saying: “The course was described by some as the most intense and demanding exercise that they’ve ever had to do in the army. The Royal Yeomanry and 1st The Queen Dragoon Guards, also known as The Welsh Cavalry, are both reconnaissance regiments, seeking out information about the enemy and the terrain”.

“The two-week exercise – Exercise Barbary Star – has been the culmination of months of training aimed at testing the soldiers’ basic military skills to ready them for any future operations”, continued Corporal Searle.

He detailed that: “The soldiers came ashore on landing crafts in a dramatic display, and once ashore, they quickly patrolled through the streets of Gibraltar to reach a stealth observation post on the Rock of Gibraltar itself”.

“Their combat skills were then put to the test when they had to fight their way through the urban operations training facility, navigating through the simulated village clearing buildings, rooftops, and access points”, he added.

The Corporal pointed out that: “Urban operations bring unique challenges not present in other environments. Contact with the enemy can be at very close quarters so the soldiers must be alert and vigilant. For example, roads could be easily used to direct soldiers into a certain area where they could be ambushed”.

“They continually have to evaluate the changing risks as they navigate through the simulated village. In an urban environment, the enemy can be in the air, on the ground, or beneath their feet. There are a multitude of threats to think about, including drones”, the Corporal concluded.