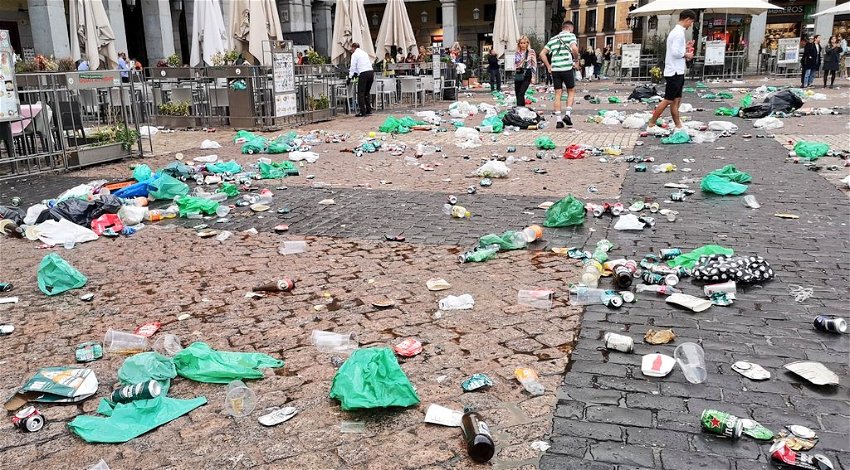 In a performance worse than their team on the field, Celtic lost 5-1, the fans left the square in an absolute and disgraceful mess on Wednesday, November 2.

Although the police and the city were expecting problems, with Celtic fans having a poor reputation, they were overwhelmed after more than 10,000 arrived in the city.

The city was expecting less than half that number with only 3,000 tickets for the game having been sold.

That left around 7,000 of the Celtic faithful to drink, sing and generally get out of hand much to the annoyance of locals.

The police did contain them in the square, which is the normal tactic as it allows them to be marshalled easily into and out of the Santiago Bernabéu stadium.

But that meant that many remained overnight in the square leaving a huge amount of litter never seen in the city. Whilst most were guilty of littering, a small number also damaged bars and terraces surrounding the square.

Although many complaints were laid with the police, they did manage to control the situation well with few outbreaks of violence or destruction to property.

But what they were not able to do is to control the litter with plastic bags, cans, bottles and packaging littering the area.

As always it is a minority that cause the most problems, but Celtic do have an issue with travelling fans that they need to deal with. In this case Celtic football fans have trashed a historic and beautiful square in the centre of Madrid.