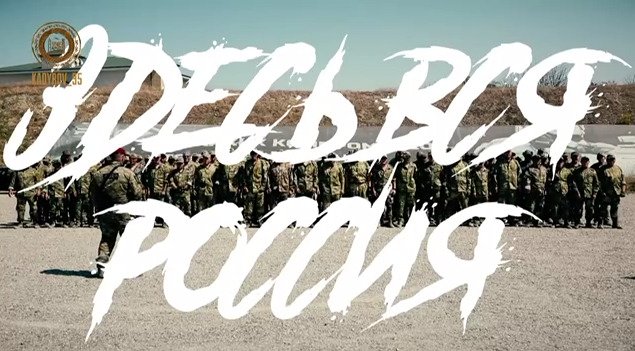 Taking to Telegram to unveil its recruitment video, Kadyrov said that active recruitment for military volunteers continues in the Chechen Republic and that “everyone has the opportunity to master combat skills at the Russian University of Special Forces, which is rightfully considered the main Russian platform for the training of volunteer forces.”

He added: “Here are the best instructors in the world, who have repeatedly proved themselves and won the most prestigious international competitions of special forces. Now they share all their experience and professionalism with volunteers, working with them, including individually. This helps future warriors to perfect their combat skills.

“Preparatory activities include courses in tactical and firearms training, field medicine, topography and terrain orientation, sniping, grenade launcher shooting and much more. During the training, the fighters are provided with comfortable accommodation with three meals a day.

“In addition, the Regional Public Fund named after the Hero of Russia Akhmat-Khadzhi Kadyrov reimburses volunteers for all expenses for the journey to Grozny and provides them with modern equipment. After training, the fighters have the opportunity to conclude a contract with the Ministry of Defense of the Russian Federation for a period of 3 months.”

On November 1, Kadyrov hosted an important meeting in the city of Grozny between Russia and Iran.

“Today the Chechen Republic has become a kind of a bridge linking Russia and Iran by providing platforms for the work of delegations in Grozny,” he said at the time.

He added: “The outcome of the 16th plenary meeting of the Russia-Iran Standing Intergovernmental Commission on Trade and Economic Cooperation was the signing of documents on cooperation in various spheres by the parties.

“The agreements and understandings reached would be fruitful for the long-term relations between the two countries. The Russian side led by Deputy Prime Minister Alexander Novak has been making great efforts in this direction.

“In the eight months of this year, trade turnover between Russia and Iran has grown by 36.4 per cent and is now approaching $4 billion. And this is far from the limit. At the end of the meeting, I had the pleasure of chatting with Alexander Novak and the head of the Iranian delegation, Javad Ouji, at the dinner table.”