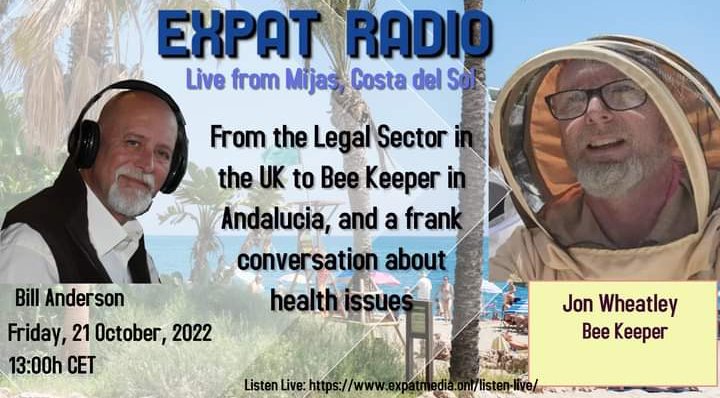 Jon Wheatley started off in Sheffield and claims the right to a Yorkshire passport and after University, despite his best efforts was recruited into the Court’s system possibly because he turned up looking a bit like Bruce Dickinson from Iron Maiden and the interviewer was Dickinson’s aunt.

He started at the bottom and gradually worked his way into the front end of the courts, although he says that learning the then Court etiquette was no mean feat. He reckons that a book in the line of James Herriot could easily have been written, entitled “It Shouldn’t Happen to a Court Clerk” after years of exposure to the criminal and offender class.

He decided that the prospects in the court business were limited and took up a teaching post at University which was brought to the brink by 9/11 when students from Asia had their travel limited. So, he went into Marketing.

Becoming unsettled in the UK he and his wife decided to move to Spain, packed up their things and came to Andalucía with no job and no idea how they were going to make a living. He says that the reality of working life in Spain is that it is longer and more demanding than people think, and it’s not all beach and relaxation at all. Having said this Jon feels that the lifestyle compensates for the harder working life.

Jon doesn’t have pets in his countryside home so much as a small zoo, with parrots, ferrets, seven dogs, all rescued, and an inherited 15kg tortoise which is 52 years old. But his passion is his bees. He had until recently around 70 hives. He and his wife swear by the qualities of natural honey. He can be found on the following website and they are often around local markets.