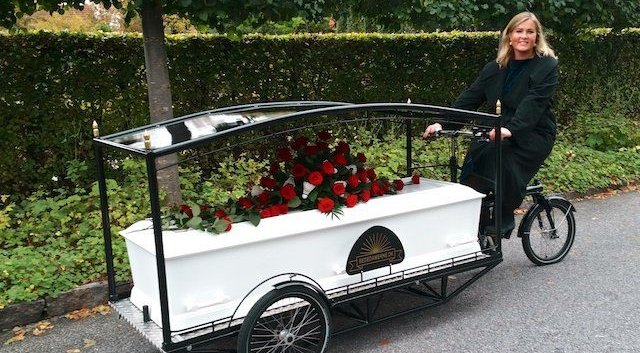 A bicycle hearse that being green and cost-effective funerals to the city of Paris has been launched by a local undertaker.

The new hearse seen on the streets on Friday, November 4 is the brainchild of Undertaker Isabelle Plumereau.

Not a new concept with similar services offered in the Netherlands, Denmark and Switzerland, it is the first in France and is expected to result in others following suit.

Plumereau pointed out that the service is quieter and more environmentally friendly as well as cheaper to operate.

She told Reuters news: “For me, it makes sense to combine the bicycle and the hearse because, when we talk about bicycles in Paris, we are talking about soft mobility and if there is one day when we need softness it’s the day when we accompany someone we love to their final resting place.

“Everyone walks at the same pace (behind a bicycle hearse) and we hear each other, we hear the sounds of nature around us, the wind in the trees, the birds. In my view this is the best way to console yourself.”

⚰️ Environmentally conscious burials are a small but growing trend, and French undertaker Isabelle Plumereau says transporting coffins with a specially designed cargo bike can confer a more down to earth pace to a funeral https://t.co/SycBSXp76j pic.twitter.com/94C3K8wsFK

Approval has been given by the Parisian authorities for the operation of the service which involves a specially adapted bicycle.

Locals seeing the bicycle hearse for the first time were bemused and not all were convinced with 49-year-old Elyes Meziou saying: “It’s quite innovative.

“But I wouldn’t it want it my own funeral.”

Funeral service prices have risen like so many other services and for some have become unaffordable and perhaps impersonal. A bicycle hearse potentially changes all of that by allowing people to be part of the funeral procession in the traditional manner, on foot, and to be able to afford such a service.