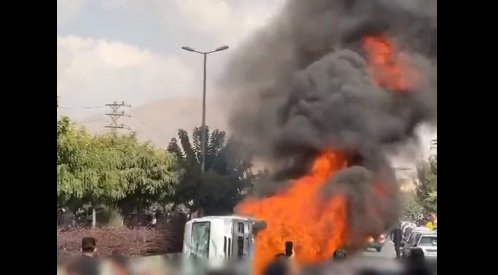 Protestors in Iran have clashed with police near the capital with confrontations becoming more violent from both sides.

According to news site France 24 on Friday, November 4, the latest set of demonstrations occurred in Karaj just outside Tehran where mourners had gathered to commemorate the death of Hadis Najafi. She was just 22 when she was shot dead by the police.

The protests also follow the death of another woman at the hands of the morality police, further fuelling tensions and sparking more demonstrations.

Video footage available online shows the Iranian government resorting to brutal tactics as it tries to quell protests, with helicopters dropping stun grenades on demonstrators and shotguns being used to kill or main.

This painful video captures the potential cost of political dissent against dictatorships: A protestor in Tehran, Iran is beaten by a dozen officers, trampled by a motorcycle, and shot at point blank. Via @AlinejadMasih pic.twitter.com/HegyJve3vb

State-run IRNA news agency has defended the actions of the police who they say were attacked, Videos they posted show a police vehicle that had crashed after being stoned and the passengers shot.

But it is not clear who instigated the attack.

What is clear is that the death toll is rising and that the general public is getting more violent in its attacks on the Basij militia, these coming in response to an increasingly heavy-handed approach from government forces.

Although the demonstrations started out in protest against the death of a young woman in the custody of the morality police, it has since grown into an anti-government movement that is targeting the strict enforcement of Islam policies. Religious leaders have become targets with people openly abusing them and even knocking their head gear off in public in open defiance of the laws.

In Iran, people are knocking off "topis" of Islamic clerics to protest against Islamic regime there.

In India, politicians wear these "islamic topis" for sake of some votes. pic.twitter.com/XGovX9PCd4

Iranian authorities have announced charges against thousands of people and have even resorted to public trials in an effort to stop the demonstrations. In some cases, the death penalty is being touted claiming that those who are in a “war against God,” will be dealt with.

For weeks now the Iran government has said that it will bring an end to the protests, however they have had little success with police and protestors in increasingly violent clashes and confrontations