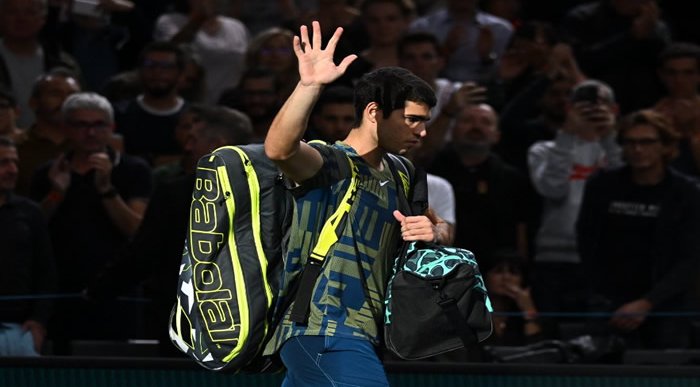 Carlos Alcaraz had to pull out of the Rolex Paris Masters 1000 after suffering an abdominal injury in the second set.

Spain’s teenage tennis sensation Carlos Alcaraz is out of the Rolex Paris Masters 1000. He had to retire during the second set of his quarter-final against Denmark’s Holger Rune today, Friday, November 4.

An abdominal injury on the right-hand side of his body ended his participation in this year’s tournament. Rune won the first set by a resounding score of 6-3, and then suddenly, the 19-year-old Spaniard seemed to be struggling in the second set.

Holger was better today and deserved to win! 🤝🏻 It was difficult to withdraw, but I was scared of making it worse 🥲 Health comes first! @holgerrune2003 pic.twitter.com/S1jqJRDgKp

The Murcian had problems with his serve and found himself in trouble both on the court and health-wise. He managed to fight through the pain barrier to reach 6-5, but the Dane – ranked 18 in the world – levelled at 6-6 and the game went to a tiebreak.

With the score at 3-1 to Rune in the tiebreak, Alcaraz raised his arm to call for the physio and it was ‘game over’ for him.

“I cannot stretch. I couldn’t serve well, I couldn’t hit the forehand well. I preferred to retire, see the extent of it and take care. I’m focused on trying to get better in the abdominal and trying to be at 100 per cent for the ATP Finals in Turin”, explained the world No1 after the match, as reported by bbc.com.

The young Spaniard now faces a worrying few days ahead of the season-ending ATP Finals which take place next week in Turin. He also has the Davis Cup Finals in the Spanish city of Malaga to think of, where he would surely represent Spain if pronounced fit.