UPDATE: Thousands turn out to call for general election 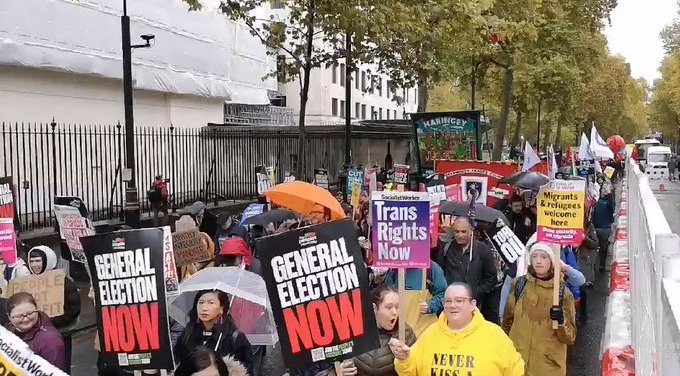 15:07 (November 5) – Thousands have turned out to call for a general election, braving the cold damp weather to make their point.

Shortly after midday thousands set off on their protest march having been joined by other campaign groups, former Labour leader Jeremy Corbyn and former Shadow Chancellor John McDonnell.

Laura Pidcock, the People’s Assembly General Secretary told the Evening Standard the march was to “oppose everything this Government stand for, in our communities and on the street”.

“Coming out of the COVID-19 pandemic, we’ve seen attacks on workers’ pay and conditions, political meltdown, an unprecedented cost of living crisis and the emergence of a huge fightback from unionised workers, including a wave of strikes engulfing the country over the summer.”

Commander Jon Savell said that extra officers had been brought in for the protest with preparations having taken place for some time. He added: “The Met has a long history of dealing with spontaneous protests in London.

“We have a very experienced policing team in place as well as robust policing measures; we can respond effectively and quickly to any emerging public order incidents.

“We fully support peaceful protest and will always try to work with organisers so that protests can go ahead safely.

“However, unlike many groups who carry out protests, Million Mask March and Just Stop Oil do not engage with us in advance of their action.”

The protest went off without a hitch and no reports of any trouble.

08:42 (November 5) – Protestors are to gather in London today Saturday, November 5 to demand a general election be called.

Organised by the People’s Assembly campaign group, the demonstrations are in response to the chaos that has reigned supreme in parliament over recent months.

Ramona McCartney, National Organiser for the People’s Assembly, said that people are increasingly concerned by the actions of parliamentarians that have forgotten they are there to serve the people and not their self-interests.

Speaking to the Guardian newspaper she said: “The government is in a deep crisis and the third prime minister in a matter of months has been decided by a tiny elite. We want to make this the biggest demonstration possible to force them to a general election and in solidarity with every striking worker.

“We want working class people to join us on this day to demonstrate how angry and determined we are, and to fight the new wave of austerity the government is forcing on us.”

Among their demands for an immediate general election are action on low pay, the repeal of anti-union laws and action on the cost-of-living crisis.

According to the organisers protestors will march around the buildings of parliament before being spoken to by a range of leaders including Mick Lynch, General Secretary of the Rail, Maritime and Transport (RMT) union.

Numerous petitions and public figures have called on the government to call an election, however the Conservative party continues to maintain that it has a mandate to be in government. A general election doesn’t have to be called before 2024 and with no prospect in sight of a vote of no confidence in parliament winning, the party will continue to govern.

Many believe that the changes in leadership on which only the party got to vote, as well as the dumping of many manifesto pledges means they no longer have a mandate.

Others believe that the current government is self-serving and is no longer acting in the interests of the public, who they say should be given the chance to decide whether those in power should continue to remain there.

Former Labour MP Laura Pidcock, now the National Secretary of the People’s Assembly, said: “This Tory government is now totally unaccountable, but outrage is not enough.

“We have to come together as a movement to organise on the streets and in our communities and show that our voices will not be silenced and that we want fundamental changes to the way our country is run.

There is speculation that other issue groups will join the march and will add their voice for the removal of the government and some ministers, including Home Secretary Suella Braverman who has been accused of being racist.

The turnout today will be crucial as protestors gather in London. A large turnout will send a strong message to the ruling party that enough is enough, however, few believe that it will bring much change with the existing government sufficiently arrogant to believe that it can continue as it has in recent years.