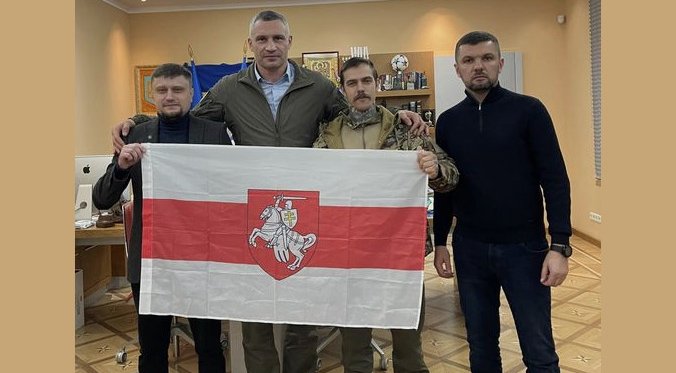 On November 4, representatives of the Kastus Kalinovsky regiment of Belarus – a regiment of volunteers from Belarus, formed specifically to defend the south of Ukraine against Russian soldiers – met with the former boxing champion in Ukraine’s Kyiv.

The regiment wrote on Telegram: “The mayor of Kyiv thanked Belarusians for their participation in the defence of Kyiv in February-March 2022.

“We remind you that the commander of the regiment Dzianis Kit was wounded during the defence of Kyiv, and 2 Belarusian volunteers died heroically.”

They added: “People’s deputy Ihar Guz was also present at the meeting.

“During the conversation, the volunteers talked about the political situation in Belarus and especially emphasised that the absolute majority of Belarusians support Ukraine in its struggle and are categorically negative about the use of their country’s territory for aggression against the Ukrainian people.

“Issues of assistance from the Kyiv city administration to Polk Kalinowski were also discussed.”

On Wednesday, October 19, the Kastus Kalinovsky regiment released footage of them using a 12.7mm large-calibre machine gun to scare off Russian soldiers.

Taking to Facebook at the time, the regiment wrote: “Soldiers of the Battalion of Volta Palka Kalinovsky carried out a coup de grâce raid on Russian soldiers from a nearby station.

“Stunned by such a brutal attack, the Russians belatedly opened fire in response, when our soldiers were no longer in sight.”

It added: “We were armed with a 12.7-mm large-calibre machine gun designed to fight against lightly armoured vehicles and firearms, to destroy the enemy’s manpower.

“Our soldiers appreciate this device for its high firepower and long-range capability. And if the Kalinovites like their weapons, the Russians really don’t like to meet on the way.

“They are very unhappy on the road!”