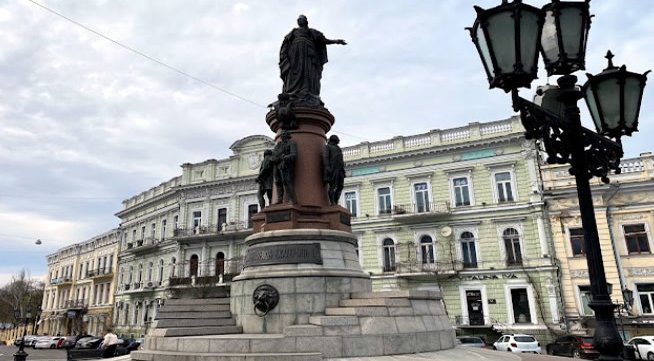 Authorities in the Ukrainian port of Odesa are preparing to demolish the iconic statue dedicated to the Russian empress Catherine II.

The famous monument dedicated to the Russian Empress Catherine II that stands in Ekaterininskaya Square in the Ukrainian port of Odesa is about to be dismantled in the near future. This was reported on Sunday, November 6 by RIA Novosti, citing Ukrainian media sources.

An announcement made by Odessa City Council, written on a piece of paper, appeared attached to a plywood fence that had been erected around the statue on Sunday morning. A black cover had also been draped over the structure.

“We apologise for the temporary inconvenience. Preparatory work is underway to dismantle and transfer the sculptural composition ‘To the Founders of Odessa'”, said the note.

Posting on Facebook, Odesa’s mayor Gennady Trukhanov wrote: “The procedure for summing up the results of the voting dedicated to the future fate of the monument ‘To the Founders of Odesa (Catherine II)’, which took place on the ‘Socially Active Citizen’ platform, has been completed”.

Trukhanov explained: “The majority of Odesa residents who voted supported the idea of ​​dismantling the monument from Ekaterininskaya Square”.

“Personally, I will vote for the dismantling of the monument and its transfer to the park of the Imperial and Soviet past, the idea about ​​​​which I spoke a few months ago”, Trukhanov summed up.

The monument has been desecrated three times over the past two months. It is regarded as part of the cultural heritage of the city, and of Odesa in general, and previously the mayor had spoken in favour of preserving it. However, the latest wave of vandalism seems to have left the council with no alternative.

In recent weeks the monument has been repeatedly doused with paint and had inscriptions written on its surface. One incident saw an executioner’s mask placed on the statue, with a hangman’s noose tied to her arm, as reported by fontanka.ru.