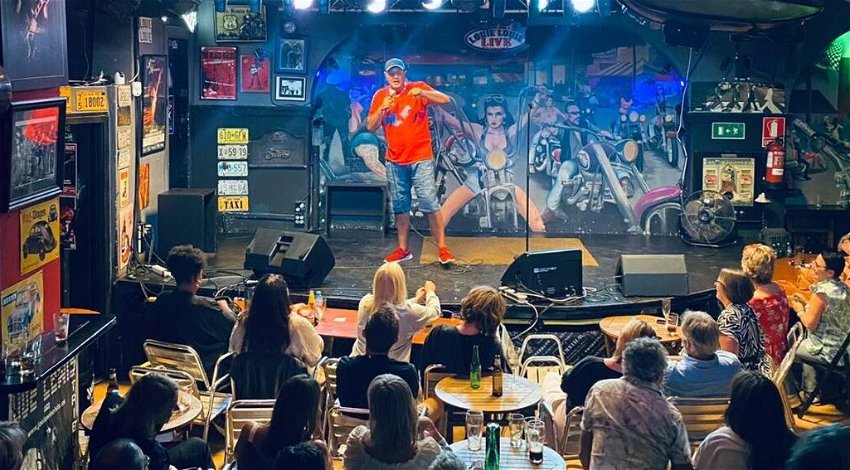 EXCLUSIVE Interview with Award Winning comedian Nik Coppin who when questioned admitted that the awards were for swimming and taking part in a football match against a lady’s team.

From his early days of working for Transport for London, Nik had always fancied being a comedian and took the plunge into stand-up in 1998 and he has been making people laugh on a full-time basis since 2004.

Like many talented entertainers, he is also a writer and artist specialising in caricatures and spent part of lockdown enlarging his portfolio.

Comedy is his first love and it has taken him all over the world with performances in much of Europe, parts of Asia, the Middle East, New Zealand and Australia where he takes part in three festivals every year.

Speaking about his travels, Nik said “I enjoy Australia and find that my style of banter works well with audiences there although I did have a run-in with a radio presenter who accused me for being a racist when I told him I supported an Australian Rules Football Club which used to be politically incorrect but now has more aboriginal players than any other team.

“I found it amusing as I couldn’t be less of a racist as my mother is English and my father comes from Barbados, but when he called me a racist in writing and advised people not to go to my show in a local newspaper, part of the Murdoch empire, a lawyer friend advised me to sue which I did and won!

“One good thing to come out of that was my next show entitled Nik Coppin is not a racist.”

For some years now, Nik has been organising regular comedy stand-up events in the Costa del Sol and it all came about because he stayed with a friend and met an aspiring comedian who insisted there was a demand for English language comedy.

Sure, enough there is and he now organises three or four sessions each year bringing over various comedians from the UK and other parts of Europe including his close friend the German comedian Henning Wehn.

The next series of shows take place in December and details of those taking part, dates and venues can be seen at https://www.facebook.com/standupcomedyspain/ (although one is actually in Gibraltar).

“I also run stand up comedy courses in La Cala as well as the odd show specially for children so there is plenty of reasons for me to keep coming back to Spain.”

Chatting about some of his other projects, it transpires that he will be appearing in the UK at The Gaiety Bar Southsea on November 27 at the invitation of comedian Jim Davidson who is filming a new version of the old TV show The Comedians with some of the originals like Mick Miller, Roy Walker and Bobby Davro together with some ‘youngsters’ like Nik.

Commenting on Jim Davidson who he has worked with before Nik said “He is a very nice guy but is a bit like your favourite uncle who doesn’t always appreciate that he is saying can be inappropriate.”

If you can’t get to see the latest shows which are described as most suitable for those aged 18+ (although they are certainly not too blue or offensive) then check out Nik’s latest book Comedy World written during lockdown with a foreword from Henning Wehn.

Thank you for reading ‘Interview with Award Winning comedian Nik Coppin’ and remember that all articles produced by Euro Weekly News may be accessed free of charge.