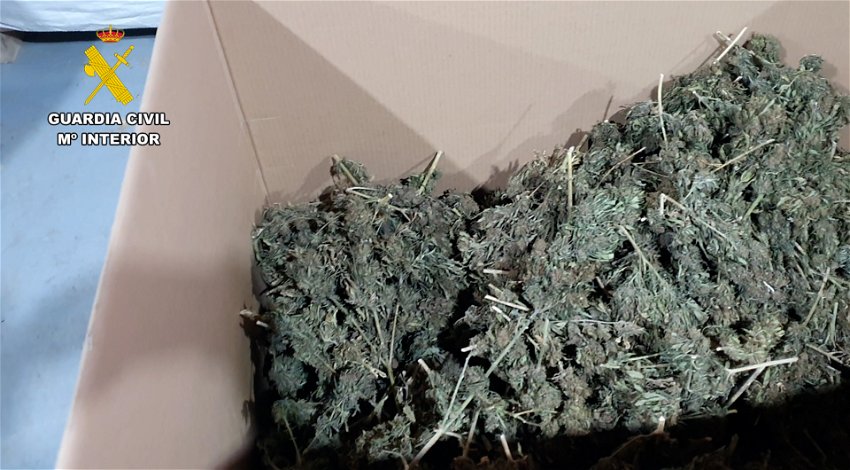 THIS is the moment that Spanish police seized their largest-ever marijuana haul.

The footage, captured by Guardia Civil officers, shows them discovering the haul after officers dismantled an organisation that had stored more than 32 tons of marijuana buds in Toledo, Ciudad Real, Valencia, and Asturias.

Through a complex business network, the organisation sent “vacuum-packed marijuana throughout the national territory”, as well as to Switzerland, Holland, Germany, and Belgium, among other European countries.

The Jardines operation concluded with the seizure of 32,370.2 kilograms of the drug – not only the largest seizure of this substance in Spain but also internationally.

Officers revealed that there were approximately 1.1m buds, which is believed to have an estimated street value of around €64 million.

Twenty people – nine men and eleven women between the ages of 20 and 59 – have been arrested as being part of an organisation, which had offices in Toledo, Ciudad Real, Valencia, and Asturias, and controlled the entire drug production and distribution process.

Police said the gang dried the marijuana plants, packaged them, and sent them to parts of Spain, Switzerland, the Netherlands, Germany, and Belgium.

The investigation began with an inspection by the Civil Guard of several industrial hemp plantations in Villacañas (Toledo). The main people under investigation owned a company that is said to have acquired the seeds, while a second “transported and planted them”.

Another company was “in charge of the care, maintenance, collection, and drying of the specimens” before the first company “acquired the already dried plants with the buds and stored them in two warehouses located in the province of Valencia”.

From there, the detainees are alleged to have processed the drug, separating the buds and vacuum packaging them in different formats to send them both to places in Spanish territory and to European countries, mainly Switzerland, Holland, Germany, and Belgium.

The second inspection took place in the town of Almagro (Ciudad Real) during the month of October and saw agents from the Toledo UOPJ discover around 37,000 plants distributed in four greenhouses and in the process of drying.

The Civil Guard said they also found four tons of marijuana stings stored in several bags with the destination of all the merchandise being the two warehouses in Valencia.

Documentation has also been found that accredited the existence of several more plantations, and machinery for processing, elaboration, and packaging, highlighting above all two machines for the extraction of pollen.