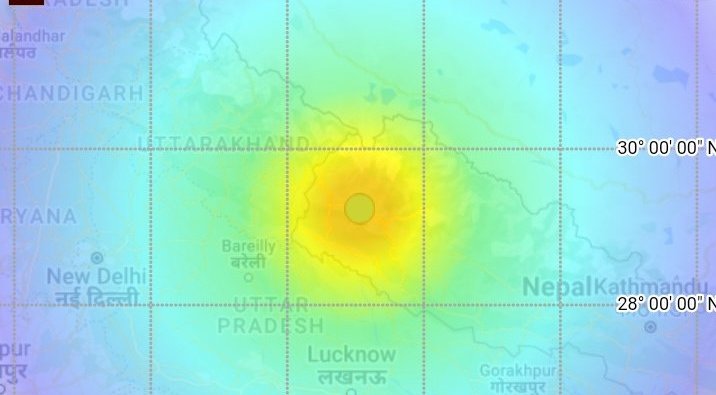 SIX people have died after a powerful earthquake ripped through Nepal, with tremors felt in New Delhi.

The earthquake measured a magnitude 6.6 and struck Nepal early today, Wednesday, November 9, killing at least six people and destroying multiple houses in the western district of Doti in its wake.

Its effects were also felt in the Indian capital New Delhi, officials said.

Five more people were seriously injured after eight houses collapsed, with each of them being rescued from the debris and rushed to hospital – including one child.

Prime Minister Sher Bahadur Deuba posted on Twitter to share his “heartfelt condolences” to those affected while informing those affected that “immediate and proper treatment” will be available for those who need it.

He said: “Expressing my heartfelt condolences to the families of those who died in the earthquake, which was centered in the Khaptad region of Far West.

“Also, I have instructed the relevant agencies to arrange immediate and proper treatment of the injured and the victims in the relief and rescue in the affected areas.”

Nepal | An earthquake of magnitude 6.3 occurred in Nepal, Manipur at around 1.57 am on Nov 9. The depth of the earthquake was 10 km below the ground: National Center for Seismology

Strong tremors from the earthquake were also felt in Delhi pic.twitter.com/YNMRQiPEud

This is not the first time an earthquake has hit the South Asian country. In 2015 two major earthquakes killed almost 9,000 people and destroyed a number of buildings, including whole towns and sacred temples. It cost the economy $6 billion to repair.

It is reported that the Nepali army sent a ground rescue team to the site with two helicopters on standby in nearby the nearby towns of Surkhet and Nepalgunj.

The quake was centered about 158 km (100 miles) northeast of Pilibhit, a populous city in the neighboring Indian state of Uttar Pradesh, and occurred at a depth of 10 km, EMSC added.

Elsewhere local media reports after the quake showed tremors were also felt in New Delhi and surrounding areas, some 350km (220 miles) from Doti.