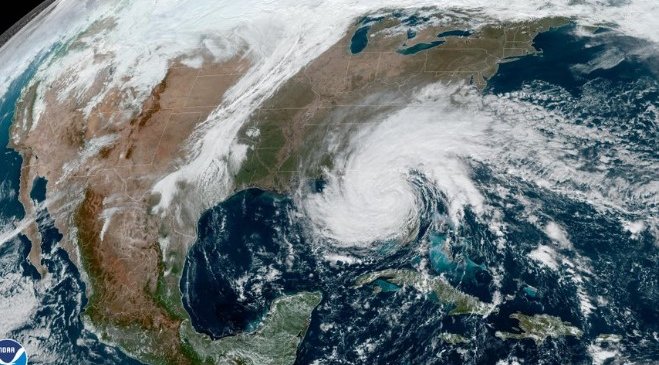 Tropical Storm Nicole made landfall around 140 miles north of Miami at 3am this Thursday, November 10, on North Hutchinson Island. It was subsequently downgraded from a Category 1 hurricane but still battered Florida with 16-foot waves and 75mph winds.

According to Orange County Sheriff’s office, two people tragically died from electrocution after a fallen power cable made contact with their car in Conway, Orlando. They were rushed to a hospital but sadly passed away later at the facility.

Huge waves crashing together on Palm Beach at high tide this morning thanks to #TSNicole next high tide around 8:45pm tonight will be worst then another around 9:15am tomorrow. Video by Dave Allen #nicole #flwx #florida #weather #ocean #waves #storm #stormy #beach pic.twitter.com/icyzTHiLbT

Nicole made landfall overnight as a hurricane. It's now been downgraded to a tropical storm.

Nicole makes unwanted history as the first hurricane in 40 years to hit Florida during the month of November. For the second time in the space of three months, residents along the Florida coastline face a huge cleanup operation. It is estimated that around 300,000 homeowners are currently without electricity.

A state of emergency has been declared by Governor Ron DeSantis for at least 45 counties. He pointed out that ‘out of an abundance of caution’, more will probably be added. During a press conference, officials warned that in areas along the east coast, waves could reach from between eight to 16 feet in height.

DeSantis has deployed 600 National Guard personnel, while seven urban search and rescue teams are reportedly on standby. He explained that the storm has forced the closure of 61 school districts.

In Flagler Beach, strong waves battering the coastline caused parts of the A1A road to collapse into the ocean. Similar conditions saw the police evacuate residents from at least 15 beachfront condominiums in Daytona Beach in case they collapsed.

More damage and flooding from Daytona Beach, FL as Tropical Storm Nicole pushes through. Please stay safe today and do not drive through flooded or barricaded roadways. pic.twitter.com/XftZ20B5dz

Although not quite comparable to two people losing their lives, in Palm Beach, Donald Trump’s Mar-A-Lago estate was evacuated until at least Friday evening. As reported by Page Six, Tiffany Trump and her fiancé, the billionaire heir Michael Boulous, are due to tie the know there on Saturday 12.

Although the wind is predicted to drop, weather forecasters still expect torrential rain for her wedding day. The couple and their families have reportedly remained in the property while all the staff have been sent home.

“They’ve sent staff home. Tiffany is still there. Some guests came in for the week, and they had all these things planned. It was going to be a whole over-the-top thing. They had to cancel events today and cancelled a golf outing for tomorrow. Everyone is stuck inside”, a source explained to the celebrity news outlet.

“Friday is supposed to be a welcome dinner and they aren’t sure it’s going to happen … Tiffany is flipping out”, they added.