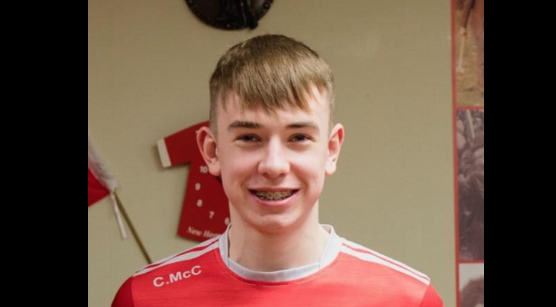 The young Gaelic footballer from Ireland’s Co Tyrone died suddenly on Tuesday, November 8, however, news of his sudden death began circulating on November 10.

His club took to Facebook to share the news: “Our club is devastated following the sudden passing of one of our players, Conor McCaughey.

“Our most sincere and heartfelt thoughts and prayers are with Conor’s family Dermot, Bernie, Michael, Caitríona, Diarmaid, Seán and Eoghan, his wider family and his wide circle of friends.”

The club added: “Conor has played for our club from a young age and has been involved in a number of recent underage championship and league successes.

“As a club we will try our very best to support the McCaughey family and Conor’s friends at this heartbreaking time.

“All club activities are cancelled until further notice.

“D’imigh tú i mbláth na hóige, ar Sholas na bhFlaitheas go raibh d’anam – You departed in the bloom of youth, may your soul be granted the Light of Heaven.”

“Deeply regretted and sadly missed by his loving parents, brothers, sister, entire family circle and friends. Our Lady pray for him.”

“To his parents Dermot and Bernie, his brothers and sister, Michael, Caitríona, Diarmaid, Seán and Eoghan and the entire family circle we at the club extend our heartfelt sympathy.”

No cause of death has been made available at this time.

Earlier this year, Tipperary in Ireland and the sport of hurling lost Dillon Quirke, a young hurler for Clonoulty-Rossmore GAA, who collapsed during a game and died.

On Friday, August 5, Dillon Quirke was playing for his side against Kilruane MacDonaghs at Semple Stadium in Thurles when he suddenly collapsed in the first half and despite being rushed to Tipperary University Hospital in Clonmel, died later that night.

Tipperary GAA said: “[We extend our] heartfelt and sincere sympathies to Dan, Hazel, Shannon, Kellie and the extended Quirke family. Also to the Clonoulty Rossmore GAA Club and his teammates on the sad and tragic passing of Clonoulty Rossmore and Tipperary hurler Dillon Quirke.”

“Dillon became ill during Friday evenings County Senior Hurling Championship game between Clonoulty Rossmore and Kilruane MacDonaghs in Semple Stadium and was taken to Tipperary University Hospital in Clonmel where he passed away.

“Tipperary GAA wish to thank all those who attended to Dillon in Semple Stadium and in Tipperary University Hospital this evening.”

Four-time British motorcycling champion Keith Farmer, 35, died suddenly in the early hours of November 10 “with his family by his side.”