Unconfirmed reports that Antonovsky bridge over Dnipro river has been destroyed 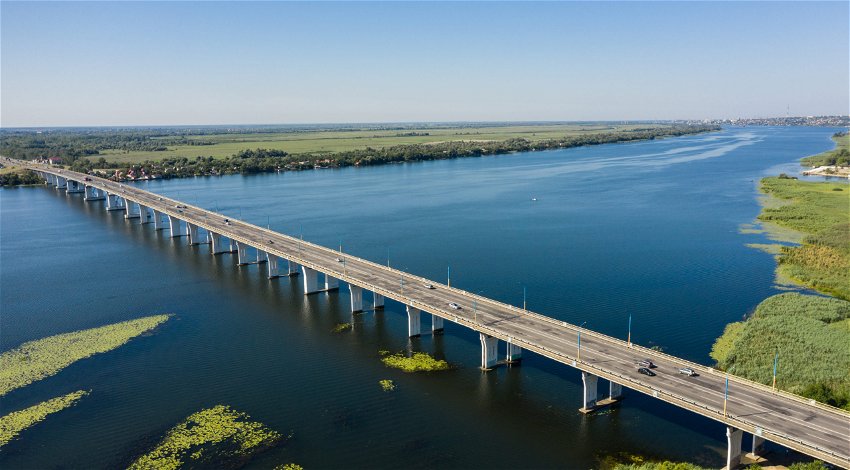 Image of the Antonovsky bridge over the Dnipro river in Kherson region. Credit: RONEDYA/Shutterstock.com

Various reports on social media claimed that explosions had been heard in the vicinity of the strategic Antonovsky bridge over the Dnipro river in the Kherson region.

Unconfirmed reports on social media late on Thursday, November 10, claimed that explosions had occurred near the Antonovsky bridge. Some, again unconfirmed, even suggested that the bridge had been destroyed.

⚡️Unconfirmed reports that Antonovsky bridge has been completely destroyed.

Similar explosions were also reported on the left bank of the Dnieper river. Others reported explosions occurring in the area of ​​the Kakhovskaya hydroelectric power station.

Various Telegram channels were posting about these incidents, with Ukrainian channels insisting that it was the Russian military firing at the bridge, while Russian ones claimed it was Ukraine targeting the structure. “It is possible that both sides are firing”, the Politika Strana Telegram channel commented.

“About the Antonovsky bridge and who is shelling it. Why the Russians would shoot at it if there are no APU forces there yet is not entirely clear. It would have been more logical for them not to shoot at the bridge, but to blow it up after the retreat was complete -or perhaps they already did”, Politika Strana wrote.

It added: “But in general, the Dnieper is turning into a new front line, and the cities on both sides of the river – including Kherson – are turning into front-line settlements with all the ensuing consequences. And it is unlikely to be calm on this sector of the front”.

Several channels also reported the sound of gunfire in the suburbs of Kherson city. Meanwhile, Vitaly Kim, the governor of the Mykolaiv region, published a post in Telegram with one letter – “Ch”. Some subscribers deciphered this to mean that Ukrainian troops had entered the village of Chernobaevka near Kherson.

It is reported that ZSU are now actively working on the RU in the Antonovsky Bridge area. There were also explosions in the Chaplynsky district / there was an explosion in the Kalanchak district pic.twitter.com/Yrf1iVU8Tp

Also MIG suggesting (unconfirmed!) the Antonovsky bridge has been finished (whatever that means). pic.twitter.com/pJa4LgTtPL