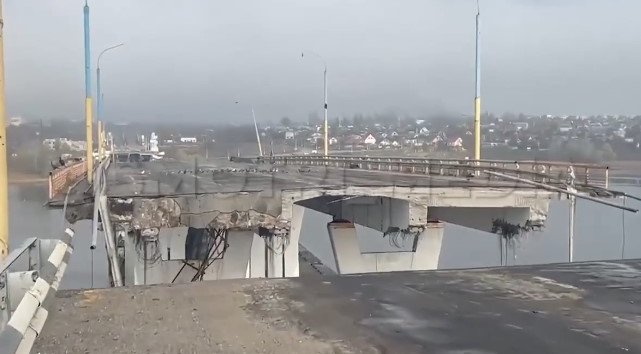 Image of the broken Anatovsky bridge over the Dnipro river. Credit: [email protected]

The strategic Antonovsky bridge that crosses the Dnipro river was destroyed by the retreating Russian forces.

Russian forces have reportedly finally completed their retreat from the Ukrainian city of Kherson today, Friday, November 11. A video reposted on social media by Anton Gerashchenko, an advisor to the Ukrainian Ministry of Internal Affairs claims to show the moment the retreating Russians blew up the strategic Antonovsky bridge that crosses the Dnipro river.

Russian media publish what they claim is the moment of blowing up Antonivsky bridge.

Russians claim they blew up the bridge after Russian troops retreated from Kherson on the early morning of 11th November. pic.twitter.com/IErp0hvqXh

Another video tweeted by Dmitri @wartranslated, shows a reporter speaking with Ukrainian locals with the remains of the broken bridge behind them. The bridge was a vital crossing point for residents who are now no longer able to reach facilities on the opposite bank of the river.

Russian reporter at the ruins of the Antonovsky bridge. Encounters locals civilians who want to get to the other side. pic.twitter.com/Gpn0YVkwBl

Video showing damage to the Antonovsky Bridge after it was destroyed by Russian forces. pic.twitter.com/nqTvrSmRZ5

It has been reported that the Russian troops are now regrouping on the other side of the Dnipro, especially in the vicinity of the Kakhovka hydroelectric power plant. As they were fleeing to safety across temporary pontoon bridges, the Ukrainians were allegedly raining shells down on them from across the river.

There were jubilant scenes in the city of Kherson today as the first Ukrainian troops entered. Residents had been under Russian occupation for the last eight months. Videos posted on social media showed locals rejoicing with the soldiers who have finally liberated them.

Although the Russian forces have beaten a retreat, the city is said to be a very dangerous place after mines and other types of booby traps were allegedly laid. Ukrainian flags were raised in the centre of the city

It was claimed earlier today that the West had offered Russian President Vladimir Putin surrender terms. According to a respected analyst, the Kremlin’s inner circle met the proposal with a positive response. Russia was told it must return all Ukrainian territories but could keep Crimea for the time being.

In return, Kremlin officials were allegedly told that they would not face any criminal charges for their part in the Ukrainian conflict.