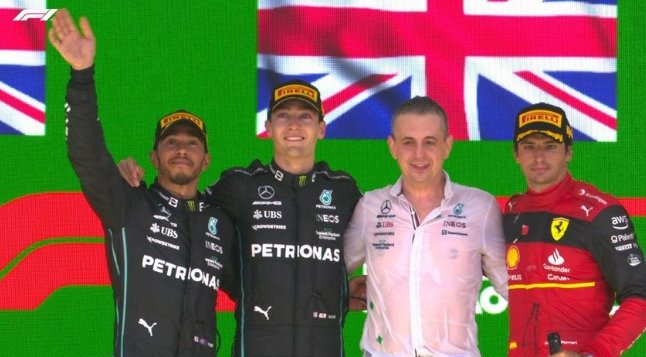 Image of the drivers on the podium at the 2022 Brazilian GP. Credit: [email protected]

George Russell drove his Mercedes to victory in the Brazilian Grand Prix to claim his first-ever F1 victory.

“Woahhh! Come on team, come on! 1-2 unbelievable. This is just the beginning guys! I knew we could do this! I knew it! I need some tissues!”, exclaimed the elated Russell.

“Congratulations to the team, thank you so much for your consistent efforts this is an amazing result, and congratulations to George”, a jubilant Hamilton said over the team radio after crossing the finishing line.

The 71-lap race was not without its share of drama though. Both Mercedes cars started from the front of the grid. Hamilton was in danger of going out when he was once again involved in an incident with his old rival and reigning world champion, Max Verstappen.

Fortunately for the Brit, his car was unscathed while the Dutchman had to pit and have a new wing fitted. Verstappen was also hot with a five-second time penalty which more or less ended his challenge for the day.

Their collision occurred at the restart after Kevin Magnussen had driven into the back of Daniel Ricciardo, with both cars ultimately retiring.

On the penultimate lap, with Verstappen failing to overtake Fernando Alonso, his engineer radioed him to ask him to move over and allow his teammate Sergio Perez through. Incredibly, he refused point blank, replying:  “I told you already last time, you guys don’t ask that again to me, OK? Are we clear about that? I gave my reasons and I stand by it”.

Ferrari’s Carlos Sainz eventually took third place on the podium, moving him level on 290 points with Ferrari’s Charles LeClerc in the driver’s championship. Because the Frenchman has one more race win this season than the Mexican, it means he is second in the table, and Perez is third.

Charles LeClerc came home in fourth, followed by Alonso in the Alpine, completing yet another excellent drive. Sixth went to Verstappen, just ahead of Perez. Esteban Ocon took eighth in the other Alpine, with Alfa Romeo’s Valtteri Bottas in ninth and Lance Stroll rounding out the top 10 in his Aston Martin.

After 71 laps of mayhem, these lot take home the points 👇#BrazilGP #F1 pic.twitter.com/f9JXRGG9iJ