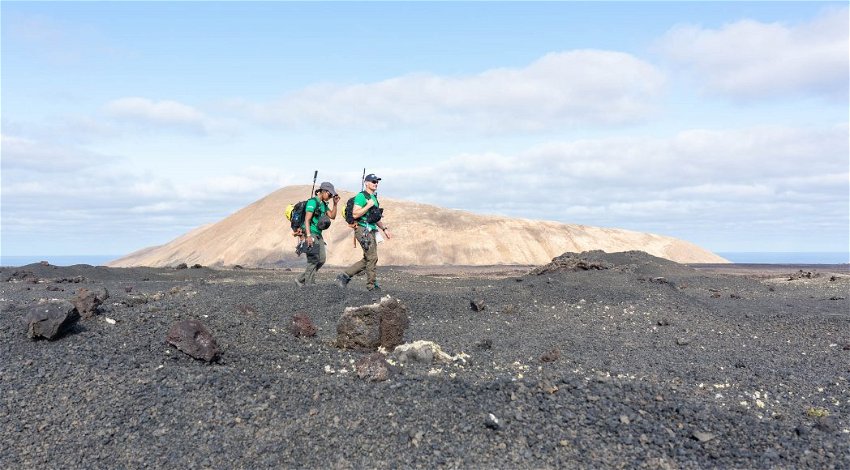 Astronauts from around the world train for Moon and Mars missions on an idyllic Spanish island.

It may seem crazy at first, but apparently, European Space Agency (ESA) and NASA have been sending astronauts to this particular Canary island to train for years.

Famous for its blackened lava fields, craters, and volcanic tubes, it seems that Lanzarote’s geology can be “uncannily similar to that of the moon and Mars”, reports Taipei Times.

Astronaut Alexander Gerst, who has completed two missions on the International Space Station, is currently working in Los Volcanes Natural Park on the island, which is just off the northwest coast of Africa.

“This place has lavas that are very, very similar to the ones that we find on the moon,” said Gerst, a 46-year-old German astronaut with the ESA.

He said the island is “a unique training ground.”

Exploring the Moon is imporant for our understanding of Earth. How did life form, and where comes our atmosphere from? Preparing to extract some major questions from our "8th continent" in the @esa #PANGAEA planetary geology training in Lanzarote together with @Astro_Stephanie pic.twitter.com/bKKgKYQzST

Gerst is one of a dozen astronauts who have taken part in the ESA’s Pangaea training course in Lanzarote over the past 10 years.

The course, whose name is a nod to the ancient supercontinent, aims to give astronauts, space engineers, and geologists, the skills needed for expeditions to other planets, including the Moon and Mars.

Gerst has just completed the Pangea training course, which helps prepare astronauts to work in a remote setting on their own.

“If we run into a problem, we have to solve it ourselves,” he said.

The lucky few picked for the trip to Lanzarote learn how to identify rock samples before collecting them, then they conduct DNA analysis of microorganisms and communicate their findings back to mission control.

“Here, they are put into the field to experience the exploration of a terrain, which is something they will have to do on the moon,” said Francesco Sauro, technical director of the course.

Sauro, along with Stephanie Wilson – one of NASA’s most senior astronauts and Pangea graduate – are both possible candidates for NASA’s next crewed moon missions.