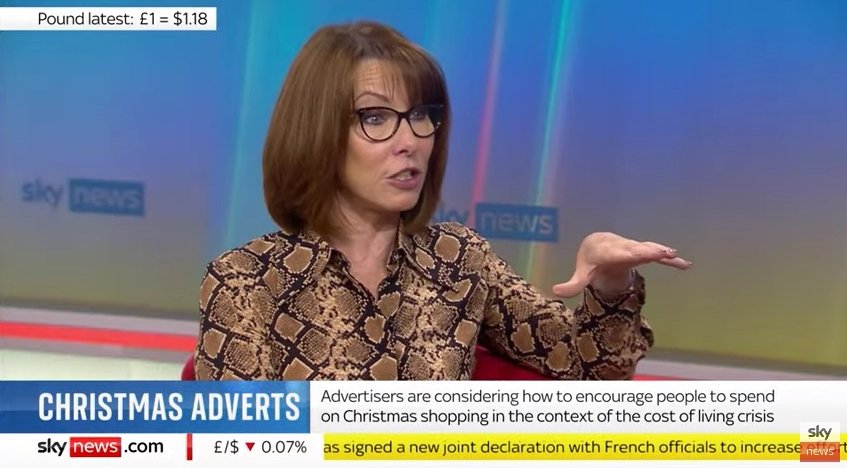 KAY Burley was forced to halt a live interview and apologise to her guest after suffering a coughing fit live on air.

The Sky News presenter was speaking to advertising expert Darren Bailes about the change in focus that many of this year’s Christmas adverts have adopted.

Kay highlighted this year’s John Lewis as an example – the department store, known for its “emotional” and “poignant” annual commercials, this year focussed its message on the 108,000 children in the UK care system.

Hailing the ad as his personal favourite, Mr Bailes said that the big brands should be “sensitive and part of the solution” to what is going on with the cost of living crisis rather than showing “tone deaf” bountiful Christmas dinner tables.

As the pair dissected the adverts on offer this year, including Tesco, which Mr Bailes called “honest” due to its messaging that there is not a lot of joy around right now.

Kay had been struggling with her voice throughout her programme due to what she called “just a cough”.

It had earlier got a little too much at one stage for poor Kay, who at one stage had to ask the production crew live on air whether she could sit back down again.

But it was during her chat with Mr Bailes that she had to stop proceeding and grab a glass of water after she had a little coughing fit.

“I’ve got a little bit of a cough today, excuse me,” she said.

“There’s a little bit of it about,” replied Mr Bailes.

The subject moved to Taylor Swift, who scooped four MTV EMAs, of which Mr Bailes was applauding her brand, when Kay could be heard coughing harshly in the background.

“This is just the tail end of it, people think you’re ill but it’s just the cough that’s left behind.”

Ever the professional, Kay continued presenting her programme with a glass of water in hand.